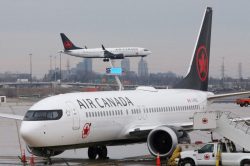 Two businessmen taking the Canadian federal government to court over its vaccine mandate for travel have defeated an attempt by the attorney general (AG) to remove from the record portions of their affidavits in support of their position.

Case management judge Mireille Tabib dismissed the AG motion on May 25 in the case of Shaun Rickard and Karl Harrison against Transport Canada and the AG.

The case represents one of four lawsuits against the federal mandate that will be jointly heard by the court in September. The other separate lawsuits have been filed by PPC Leader Maxime Bernier, former Newfoundland premier Brian Peckford along with five applicants, and Quebec lawyer Nabil Belkacem.

Toronto civil litigation lawyer Sam Presvelos, who represents Rickard and Harrison, told The Epoch Times that the AG sought to remove parts of his clients’ affidavits that explain what information they reviewed before choosing not to get a COVID-19 vaccine.

Presvelos said that among the documents the AG wanted removed were official government information and statements from public health officials that were contradictory at times, such as on the usefulness of masks or on border closures. The AG also wanted to remove information that said unvaccinated and vaccinated individuals can carry the same amount of viral load.

“We believe the government didn’t like this information in the record—they took the position that the Applicants were masquerading as doctors/experts and that the evidence was hearsay because they did not publish the data, [so] they cannot opine on the data given their lay background,” Presvelos wrote in an email on May 27.

Presvelos says he argued against the motion by telling the court that the applicants’ affidavits had not been submitted as expert testimonies but rather as a way for the judge to understand the applicants’ “state of mind” and that they could be “relevant to a Charter analysis.”

Rickard and Harrison, who set up a fundraiser on the crowdfunding platform GiveSendGo to help finance their lawsuit, have secured the affidavits of five expert witnesses, including Dr. Neil Rau, Dr. Richard Schabas, Dr. Jennifer Grant, Dr. Adam Sirek, and Dr. Joel Kettner.

Kettner, a former chief public health officer in Manitoba, was cross-examined by the Crown on May 30.

The Epoch Times reached out to the Justice Department, which is headed by Justice Minister and Attorney General David Lametti, for comment on the Rickard-Harrison case, but was referred to Transport Canada.

In their response, Transport Canada confirmed that the AG sought to strike out portions of the affidavits but didn’t address the rationale behind the move.

“The Court dismissed the motion because Mr. Rickard and Mr. Harrison both provided supplementary affidavits confirming that they were not relying on the portions of the original affidavits that Canada sought to strike as fact, which the Court accepted,” said Transport Canada spokesperson Hicham Ayoun in an emailed statement on May 27.

“The Government of Canada’s position is that the vaccination mandate is consistent with the Canadian Charter of Rights and Freedoms, as well as Canada’s obligations in the area of human rights,” Ayoun said.

Affidavits
Rickard states in his affidavit that the vaccine mandate for travel has prevented him from visiting his ailing father in the UK, impacted his efforts to grow his business, and taken a heavy toll on his family and mental health.

The affidavit provides Statistics Canada data showing that COVID-19 is mostly dangerous for the elderly and those with co-morbidities. For these reasons, Rickard assessed his personal risk as low.

Harrison’s affidavit provides COVID-19 vaccine information promoted by the authorities, who said the shots would end the pandemic, as well as real-world data to show that the vaccines can’t stop virus transmission.

His affidavit quotes a paper published in the medical journal The Lancet stating that vaccinated and unvaccinated individuals can transmit the virus similarly.

“There is growing evidence that peak viral titres in the upper airways of the lungs and culturable virus are similar in vaccinated and unvaccinated individuals,” says the paper published in January.

Presvelos said these are parts of the affidavits the Crown sought to strike out, arguing that the plaintiffs don’t have the ability to interpret the data.

Other Lawsuits
The legal advocacy group Justice Centre for Constitutional Freedoms (JCCF) has been involved in many court challenges to COVID-19 restrictions in recent months. It is currently representing Bernier as well as Peckford and his co-applicants on the issue of federal travel mandates.

The JCCF says Canada is the only country in the developed world that bans unvaccinated citizens from air travel.

“Canada’s ban on unvaccinated flying is especially egregious given Canada is the second-largest country in the world by landmass and Canadians have a far greater need to use air travel for work, family and health reasons than do the citizens of most other countries,” JCCF lawyer Allison Kindle Pejovic said in an email.

Pejovic says experts’ testimony also confirms that “both the vaccinated and unvaccinated spread Covid.” She argues that this means the government’s rationale for the ban on air travel is “fatally flawed” and that there is “no justification for the serious infringement on Canadians’ Charter rights.”

In another case, Quebec lawyer Nabil Belkacem, who is representing himself, says he is challenging the mandate because he “immediately saw an intolerable violation of Canadian citizens’ fundamental rights by the government.”

“Unvaccinated citizens can take a plane into Canada, but then cannot leave. No one can defend the merits of these measures,” Belkacem told The Epoch Times.

The lawyer says unvaccinated travellers are banned from air travel even though they could be tested for COVID-19 before travelling, while vaccinated individuals who are infected are allowed to travel without issue. The lack of accommodation is not compliant with the charter, he says.

Outside Pressure
Outside pressure on the federal government to scrap its travel restrictions has been building recently due to the long delays facing travellers going through Canadian airports.

The International Air Transport Association (IATA), a trade organization that represents most of the world’s airlines, wrote to Ottawa on May 24 urging the feds to take action to reduce the wait times.

It said that the vaccine mandate, the ArriveCAN application, and random on-arrival testing are impeding measures and proposed alternatives if these restrictions cannot be scrapped.

“The relevant authorities must urgently consider removing the last remaining travel-related COVID-19 restrictions and work with the industry on policies and processes which will allow passengers to pass through airports with no undue delay,” said Peter Cerda, the IATA’s regional vice president for the Americas, in a May 24 statement.

Internal pressure coming from the Conservative opposition has been steady, but a motion asking the government to ease airport rules was defeated on May 30 by all of the other parties.

Meanwhile, Transport Canada says the measures are needed to protect the public.

Noé Chartier is an Epoch Times reporter based in Montreal.

Style at Home: Bring a Bit of ‘Bridgerton’ Into Your Home

‘This Is What We Trained For:’ Soldiers Depart to Help Humanitarian Crisis in Europe