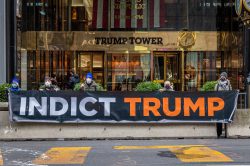 Demonstrators hold a banner reading “Indict Trump” at Trump Tower prior to a protest on the first anniversary of the January 6 riots at the Capitol. (Photo by Erik McGregor/LightRocket via Getty Images)

The financing came from Axos Bank of San Diego, which launched in 2000 as Bank of Internet USA. Its CEO, Gregory Garrabrants, has contributed $50,000 to Republican campaigns, including $9,600 in support of Trump, since 2012, according to records with the Federal Election Commission.

Trump’s previous mortgage on his flagship piece of real estate, $100 million from commercial real estate investment trust Ladder Capital, was scheduled to come due in September.

Update March 9, 2022, 6:07 p.m.: “Trump Tower is one of the most iconic properties in the world and sits on arguably the most prestigious corner in all of New York,” Eric said in a statement provided after this article was published. “We have incredibly low debt, have a tremendous amount of cash and have an extremely profitable company. We had no problem refinancing.” A spokesperson for Axos said that the bank had no comment.

In November 2021, Forbes valued Trump Tower at $285 million. Trump had an estimated $1.3 billion in debt across all his properties as of October 2021, based on Forbes reporting.

The Trump Organization refinanced its $100 million loan on Trump Tower in February, according to documents registered Tuesday with New York City’s Department of Finance.

Chart Wars: Between American and United Airlines, Which Stock Will Bounce Higher?

Ukraine’s deputy PM on Mariupol hospital: ‘There is no doubt this was a targeted attack’

Police: No Charges in Shooting at Rapper DaBaby’s House

Nepalese man reunites with his family, thanks India for evacuation from Ukraine