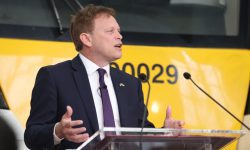 British Transport Secretary Grant Shapps on Sunday accused the unions of “gunning” for crippling rail strikes that he said are “completely unnecessary” and self-harming.

Union leaders confirmed on Saturday that strikes will be held on Tuesday, Thursday, and Saturday across the rail network and London Underground over pay, jobs, and conditions. The action by tens of thousands of rail workers will cripple services for most of the week across the country.

Mick Lynch, the general secretary of the Rail, Maritime, and Transport union (RMT)—the UK’s largest rail union—blamed the action on the government’s decision “to cut £4 [billion] of funding from our transport systems—£2 [billion] from national rail and £2 [billion] from Transport for London.”

Shapps on Sunday accused the unions of being “militant” by pushing for strikes, but Labour in turn accused the Conservative government of being militant by not getting involved.

Speaking about the planned strikes on Sky News’ “Sophy Ridge on Sunday” programme, the transport secretary said: “It is a huge mistake. The unions have been gunning for this strike throughout. This strike is completely unnecessary.”

Calling the strikes “disastrous,” Shapps said they will “inconvenience” students doing their exams and patients who have had their operations postponed during the CCP (Chinese Communist Party) virus pandemic.

He also accused the union of pulling “a stunt” by calling on the government to join the talks.

“This is a stunt at the 11th hour by the union, suddenly coming forward and saying ‘We need to negotiate with the government now’ even though this last month they told me they wouldn’t be seen dead negotiating with the government.”

Shapps said failing to modernise railways and improve efficiency will be “jeopardising the future of the railway itself,” adding, “I think it is a huge act of self-harm to go on strike at the moment.”

“I don’t believe the workers are anywhere as militant as their unions who are leading them up the garden path. They are gunning for this strike. It is completely unnecessary,” he said.

Undated file photo of a train arriving at Bristol Temple Meads station in Bristol, England. (Andrew Matthews/PA Media)
Speaking on the same programme, Labour’s shadow levelling up secretary Lisa Nandy said government ministers are “the only people” who can resolve the stalemate between the unions and the rail operators.

“During the pandemic, they took the right to negotiate back from train operating companies, so they’re the only people who can resolve this and yet they’re not prepared to. The biggest problem that this country has is not militant workers, it’s a militant government,” she said.

She also claimed the “railways are fast becoming no-go areas for many, many people,” arguing cuts to railways harm passengers as well as workers.

“I’m not sure when Grant Shapps last got on a train but the railways are fast becoming no-go areas for many, many people. People with disabilities, older people, women particularly travelling late at night,” she said.

“The government should not be calling it efficiency savings to take skilled, experienced staff off the railways who help to keep us safe … the repeated amounts of cuts that he’s [Shapps] trying to make to the railways don’t just harm the people who work on them, they harm the travelling public as well,” Nandy added.

Shadow foreign secretary Lisa Nandy speaks on stage at the Labour Party conference in Brighton, southeast England, on Sept. 27, 2021. (Gareth Fuller/PA)
Conservative backbencher Jake Berry also called on the government to join the negotiations, telling Times Radio the government should “prioritise those on the lowest wages who are really struggling to get a decent pay rise.”

Speaking to LBC, Lynch said railway workers got threats to their jobs and working conditions and had their salary frozen, and they “want a guarantee of no compulsory redundancies.”

He also said workers must be offered an acceptable settlement within the next 48 hours before the strikes can be called off.

“I’m serious about trying to find a solution and work out a compromise that gives our people a decent pay rise, but it has to be affordable for taxpayers and fare-payers,” he said.

“Our offers have so far been rejected, with union demands far from being affordable. We will continue to talk and to try and find a way through and avert this needless and damaging strike.”

Simon Veazey and PA Media contributed to this report.

Netflix releases: Everything coming and going the week of June 19th