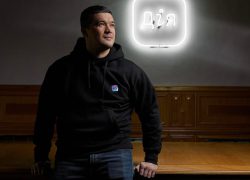 Mykhailo Fedorov, 31-year-old chief of the Ukraine Ministry of Digital Transformation, wants all Western tech companies to stop selling to Russia—with mixed results. Some continue to serve Russian businesses, including sanctioned ones.

Photographers of the Ministry of Digital Transformation of Ukraine: Anton Filoneko, Daniyar Sardarov

Over the last decade, SAP has established a solid presence in Russia despite President Vladimir Putin’s 2014 annexation of Crimea. This week, Ukraine intensified its campaign to shame the German business-software beast into ditching its Russian customers.

According to a Forbes review of company filings and LinkedIn profiles of SAP technicians, SAP’s dealings in Russia have included contracts with multiple companies recently sanctioned over Putin’s unprovoked invasion of Ukraine. They include businesses on sanctions lists drawn up by the U.S., the U.K. and the European Union in recent weeks, such as Gazprom, Rosneft, Sberbank, Rosselkhozbank, Transneft, United Aircraft Corp. and VTB Bank, to name a handful of the biggest.

SAP’s sprawling work with Russian businesses has been chronicled over recent years, with Reuters in 2018 claiming it supplied 53 of the top 100 Russian companies by revenue. Now Ukraine, which is actively working to isolate Russia from international commerce, is accusing SAP, one of the top five software companies in the world with a market cap of over $120 billion, of continuing to support its banking customers who are, in turn, fueling the Kremlin’s war machine.

During a 40-minute interview with Forbes from a secure location in Ukraine, Mykhailo Fedorov, deputy prime minister and head of the country’s digital transformation department, said SAP “continues working with Russian state banks, which are financing terrorism and aggressive activities against Ukraine.”

President Volodymyr Zelensky is also applying his considerable pressure. He tweeted earlier this month that SAP—as well as rivals Microsoft and Oracle—needed to go further in completely cutting ties to Russia. Fedorov says he talks two to three times a day with the president about the country’s digital strategy in wartime.

SAP reiterated its previous statement in which it said it was no longer working with sanctioned companies, though would not say if those customers could still use SAP technology or avail themselves of technical support. The company had previously said it wouldn’t be signing any new contracts in Russia and that it was “stopping business in Russia aligned with sanctions.’’ Oracle, meanwhile, has gone further, saying it was cutting off updates and customer support as well as refusing to sign any new contracts.

The ‘digital blockade’
Fedorov’s work to get Western tech companies to ditch Russia isn’t a small operation. What he calls a “digital blockade” is targeting thousands of businesses. They are receiving personal letters and being called out on social media.

“It is a monumental effort,” Fedorov told Forbes. “We’ve been holding meetings, talking to them on Zoom, texting them, emailing them, writing them official requests. . . . What you’re seeing on Twitter is actually the tip of the iceberg.”

It’s been effective, with tech giants like Apple, Google, Microsoft, Oracle and many others cutting Russia loose. Fedorov’s team convinced Elon Musk to provide satellite internet to the country, too. Musk’s Starlink service is now being used by tens of thousands of Ukrainians, he said.

Fedorov said he continues to believe Cloudflare, which provides websites with protection from distributed denial of service attacks, in which servers are flooded with traffic to make them unreachable, should quit all Russian business. San Francisco-based Cloudflare, which has a $30 billion market cap, said it didn’t want to stop protecting Russian websites that oppose the war and Putin’s regime, as it could risk helping to stifle freedom of speech in the country. It also said it would cease working with sanctioned entities and provide pro bono services to Ukraine.

That sentiment was echoed by Victor Zhora, deputy head of Ukraine’s State Service for Special Communications and Information Protection. In a press briefing earlier this week, Zhora said that the call on Cloudflare was not to “make the protection of Russian infrastructure weaker” but as part of a broader campaign to appeal to all providers to stop providing the Kremlin with “technological advantages . . . to continue supporting their military services . . . [and] the disinformation media.”

Cloudflare didn’t immediately respond to a request for comment.

Will NASA’s Subsequent Flagship Mission Be To ‘Ice Big’ Neptune And Its Mad Moon Triton?

Democrats are ‘the party of the rich’: Former White House press secretary

Florida police hunt for suspect who shot dog in the face