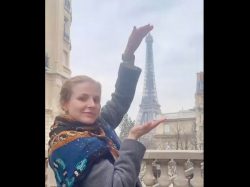 A graphic fake video of Paris under attack is being spread widely on social media by the Ukrainian government and local news outlets.

Even when deployed for a cause many people agree with — to demonstrate the broader risks of Russian aggression — experts say the graphic video may be dangerous.

The Eiffel Tower destroyed by missiles. Parisian neighborhoods reduced to rubble. France’s capital consumed in smoke. Sirens and screams amplified by the booms of bombs.

They’re moments from a viral fake video of Paris under siege. The graphic footage, which looks real, is being disseminated on social media by the Ukrainian government and local news outlets to send the message that what’s happening in their home country could come to pass in other democracies, and to urge the closing of airspace over Ukraine.

But at a time when doctoring of reality on the internet can have powerful, real-world consequences — and when the challenges of verifying facts about the war have only exacerbated distrust in governments and the media — misinformation experts are criticizing the move as potentially dangerous.

As Russian President Vladimir Putin escalates his attacks on Ukraine, the information war is also intensifying. While the Kremlin ups its use of propaganda, crackdown on free speech and censorship of news and content from outside the country — Russia blocked Instagram on Monday — Ukraine is responding with its own propaganda offensive. But at a time when rampant mis- and disinformation online threatens to worsen the already deadly conflict, even those sympathetic to the Ukrainian cause are warning that some of its online activity is pushing the limit.

Though the origins of the 45-second video are unclear, it has been picked up and spread far on social media by Ukrainian leadership and official news sources over the past week. The video has been shared and viewed millions of times in posts by the verified accounts of Ukraine’s Ministry of Defense on Twitter; Ukraine’s deputy prime minister, Mykhailo Fedorov, in messaging app Telegram; and UkraineNOW, the country’s “main verified source of official information,” on Telegram. Despite suspending publication late last year, The Kyiv Post has also shared the video on Twitter and on Facebook, and it has traveled in hundreds more posts on Instagram with the hashtag #ifwefallyoufall.

Only at the end of the reel does a disclaimer clarify that the scenes of destruction in Paris are a mere hypothetical. “Just think if this were to happen in another European capital,” says text that appears, followed by a quote from Ukrainian President Volodymyr Zelensky calling to “close the sky over Ukraine” — a plea repeated in his emotional address to Congress on Wednesday. “If we fall, you fall.”

Asked about the video during a phone interview on Wednesday, Fedorov, the Ukraine deputy prime minister, told Forbes that “closing the sky is instrumental for us to defend ourselves successfully in this war. And this is why we are reaching out through a number of channels. Our volunteers and our agencies that are volunteering for us are creating a lot of content in this direction. The basic point of all this content is to show citizens basically a taste of what it’s like” to be under attack.

In response to questions from Forbes, Twitter said it has begun actively monitoring shares of the video “and, in instances where it violates the Twitter Rules, specifically our synthetic and manipulated media policy, we’ve taken enforcement action,” spokesperson Trenton Kennedy wrote in an email, without specifying what that action includes. Facebook did not immediately respond to a request for comment.

Farid, whose research has focused on image analysis and human perception, says that while the text at the end of the clip shows it’s not intended to deceive, “releasing a video like this into the wild can be dangerous as it would be trivial to remove the closing text, label the video with a sensational headline, and watch it spread virally online.”

Misinformation researcher Paul Barrett, deputy director of the NYU Stern Center for Business and Human Rights, added that even though the text makes explicit that the footage isn’t real, disseminating fake video online is generally “a bad idea.”

“It blurs lines between fact and falsehood and can be used to manipulate users in connection with elections, public health policies, and the conduct of wars,” he tells Forbes. “If the creators of this video had sought my advice, I would have suggested finding another way to convey their message.” Barrett also called for platforms to append a label to the video, identifying it as a simulation and directing users to authoritative sources of imagery and news about the Russian invasion.

Steven Brill, co-CEO of NewsGuard, a journalistic organization focused on fighting misinformation and improving media literacy, echoed the need for labels. “We’re against misinformation of any kind,” he says, “which is why we favor labeling the sources of any information based on their reliability and trustworthiness.”

Ukraine’s Ministry of Digital Transformation told Forbes in an email that the video had been made by “some Ukrainian creative guys” who are volunteering in the war effort by producing photos and videos. The ministry said “we don’t mind” reposting and sharing such content.

UkraineNow, which describes itself as a government organization running “the official Facebook account of Ukraine,” also posted a photo of Paris under attack, asking in the caption: “Who is next? After Ukraine?”

Technology is only making it easier to alter videos and photos, with seemingly real “cheapfakes” becoming even lower-tech and a lighter lift to create than “deepfakes.”

Some fear that governments and news organizations spreading sensitive, doctored material could set a troubling precedent for others with access to digital tools that would allow them to do the same.

This video “adds to the general distrust in what we see online,” UC Berkeley’s Farid said. “That is, if this is fake, then what else is fake?”

Thomas Brewster contributed to this report.

Deeper and Deeper in Debt