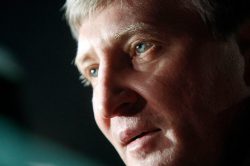 Rinat Akhmetov, whose fortune has fallen by more than $8 billion since Putin attacked Ukraine, vows to help his country keep fighting.

On February 22, as hundreds took to the streets of Mariupol, Ukraine to protest Russia’s approach, the country’s richest person Rinat Akhmetov reaffirmed his loyalty to his nation and its government. Speaking from the port city of nearly half a million people where his mining conglomerate Metainvest is headquartered, he announced that he would continue to make investments in his businesses and country “no matter what dreadful scenarios we face.”

The son of a coal miner who grew up in Donetsk but has not been back since Russia’s invasion in 2014, Akhmetov knew how bad things could get. He had been hit hard by that earlier attack. Several of his assets—including real estate, dozens of gas stations and the home stadium of Shakhtar Donetsk, one of Ukraine’s most successful soccer teams—became virtually worthless overnight after the territories were seized.

This time he was preparing for the worst. “I have already instructed my foundation to help with evacuation, medicines and everything necessary, if needed. We will do everything to prevent a humanitarian disaster,” he said two days before Russia’s invasion.

Since then, his fears have come true as Russia’s ruthless attacks have reportedly left 1,200 dead in just Mariupol. On Wednesday, a maternity hospital there was destroyed by a Russian air strike. “I can’t wrap my head around the fact that Mariupol is in a complete blockade in 2022, that people are forced to hide in the workshops of our production plants,” Akhmetov said in written responses to Forbes Ukraine. “It is impossible to hear or talk about it without tears in your eyes that people melt snow and drink meltwater to stay alive. That a 6-year-old girl died of dehydration under rubble at the center of Europe.”

The billionaire, whose fortune has dropped from nearly $14 billion to less than $6 billion in just two weeks and may likely be much less, responded on Wednesday to questions from Forbes from an undisclosed location in Western Ukraine. His complete answers, provided to Forbes Ukraine, are below.

1. What must the West/the world do to stop Putin?
Akhmetov: “We see the united action of the western world on an unprecedented scale. I am deeply grateful to our international partners for that.

What else can and must they do? I believe everything that Ukraine, the Ukrainian people and the Ukrainian President are asking for.”

2. What would be a ‘victory’ for Ukraine, in your opinion?
Akhmetov: “A total ceasefire, complete withdrawal of Russian troops from Ukraine, and full restoration of the internationally recognized borders of Ukraine.That includes the Crimea and Donbas.”

3. Why the Russian forces target civilians, shell entire residential areas, and destroy cities? What are they aiming for?
Akhmetov: “What is unfolding here is a war crime and a crime against humanity, against Ukraine and the Ukrainians.This can neither be explained nor justified.”

4. Does this war go beyond Ukraine, is Putin aiming at Europe and the US?

Akhmetov: “Putin is aiming at countries that have democracy, freedom, and independence. So all the free world counties are potential targets. If Ukraine together with you fails to stop him, nobody knows who’s next.”

6. What are your workers doing? Are they still being paid?
Akhmetov: “Yes, they receive salaries. Today, all our businesses focus all their efforts on helping people. I can’t wrap my head around the fact that Mariupol is in a complete blockade in 2022, that people are forced to hide in the workshops of our production plants. It is impossible to hear or talk about it without tears in your eyes that people melt snow and drink meltwater to stay alive. That a 6-year-old girl died of dehydration under rubble at the center of Europe.”

7. How are you using your international network?

Akhmetov: “SCM is an international company. Each of our employees is now using all their connections and opportunities to get the true information across to our international partners that peaceful Ukrainians are dying and suffering, that the tragedy is happening in our country.”

8. How do you help Ukraine and Ukrainians?
Akhmetov: “My Foundation is helping Ukrainians survive by providing water, food, medicines, and any help we can give here and now. SCM businesses are helping the army and territorial defense forces to defend our sovereignty, our freedom and independence, and win the war.”

9. How are you working with other business leaders?
Akhmetov: “I am working with my company and my people. I am doing everything I can. I am confident that other people are doing the same.”

10. Are you in touch with any Russian business leaders? Have any voiced any concerns about Putin’s behavior? Have any talked about trying to oust him?

Akhmetov: “No, I do not have any contacts with any Russian business representatives and I am not running any talks with any of them.”

11. How are you helping Zelensky?
Akhmetov: “First of all, we are helping Ukraine and the Ukrainian people. I have already said this: we are helping and we will keep helping people. And we will be helping our army and the territorial defense to stop the military aggression against our country.”

12. How are you spending your days now?
Akhmetov: “I am in Ukraine and I am not going to leave the country. I share the same feelings with all Ukrainians: I am sincerely waiting for the victory of Ukraine in this war. And we will start to rebuild the country to make it happier and more prosperous. On my end, I will spare no expense or effort to achieve this goal.”

Governor of Lviv Looks to Businesses as Refugee Flow Ebbs

Larry Kudlow: How the US Could Gut Russia’s War Chest | CPAC 2022