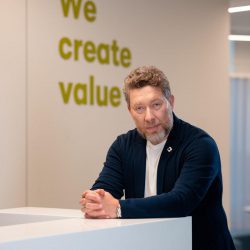 Andrey Zdesenko, one of the top 100 richest people in Ukraine, is the founder of Biosphere Corporation, the largest manufacturer of household products in Ukraine. His company is now helping deliver aid to Ukrainians.

“There’s a popular saying in Ukraine,” says Alex Medovoi, owner of three businesses in the war-torn city of Kharkiv. “The Ukrainian night is very quiet but in the quietest time of the night one should hide what’s most valuable,” he says. For Medovoi that’s his employees. The 36-year-old says he’s spent $340,000 to evacuate about 85% of them and others from Ukraine’s second-largest city as it’s been battered by a brutal Russian assault.

Medovoi says he doesn’t know the condition of the offices he left behind of his travel tech consultancy, AltexSoft, or of his children’s food company or children’s education centers, which altogether brought in roughly $20 million in 2021. “For our businesses that focused on the local market, there’s no business because there is no market,” Medovoi says.

Alex Medovoi, 36, owns three businesses in Kharkiv, and has spent his company’s resources to help evacuate his employees among several other civilians.

Entrepreneurs across Ukraine like Medovoi have been fighting to take care of their employees and protect their businesses amid a wide-scale Russian invasion. Pained by their losses but hopeful for victory, they continue to help civilians, the police, and the Ukrainian army by delivering necessities like food, medicines, diapers, and blankets.

Andrey Zdesenko, the founder of Biosphere Corporation, has idled his three factories in Ukraine that churned out diapers, wet wipes, and other household staples. He says he’s still paying his Ukrainian suppliers and his 2,500 employees, many of whom he says have taken refuge in bomb shelters.“They have trusted the company for many years,” he says.

Zdesenko, one of the 100 richest Ukrainians, according to Forbes Ukraine, has also set up five centers where his company’s volunteers are handing out food and sanitary necessities from the company’s inventory.

After founding Biosphere Corporation in 1997 in his hometown of Dnipro in central Ukraine, Zdesenko built the company into the largest Ukrainian manufacturer of household and personal care products, exporting to 30 countries and pulling in about $250 million in revenue in 2021.

“It’s really, really sad because we spent 10 years to tell them Ukrainian products are good products, reliable quality, nice price, please use, they’re made in Ukraine,” the 52-year-old Zdesenko says. “We put a lot of passion and heart into our product.” He predicts the war will cause poverty and it will take about five years for the country’s economy and infrastructure to rebuild from the damage.

Self-service supermarket chain Le Silpo is a part of Fozzy Group, a billion-dollar group of more than 900 retail chains in Ukraine that is keeping its shutters open to provide food and medicine while the stock lasts.

Fozzy Group, which operates 900 supermarkets and convenience stores across Ukraine, is fighting to keep as many stores as it can open and supplied. The group, which includes supermarket chains Le Silpo and Fora, brought in roughly $3 billion in revenue in 2020 and employs 68,000 in Ukraine.

“We work day and night under Russian shelling to provide all the goods that are needed for our civilians,” said Ivan Palchevskyi, a spokesperson for Fozzy Group.

The company has converted warehouses into makeshift humanitarian aid centers, distributing food and medicines. But they’re close to running out of a long list of basic necessities, including water, pasta, cereals, canned food, toilet paper, and diapers.

For smaller businesses, the war has created an existential crisis.

Peter Souslenskii, the CEO of a Kharkiv-based nanoparticle manufacturing company, NVKF Universal, has sent his wife and kids to safety in Dubai while he’s fled to the Carpathian Mountains. His 70-year-old chief technologist, Volodymyr Koltsov, is trapped in a village surrounded by Russian tanks. At this point, Souslenskii doubts that his business will survive.

“I mean, it’s complete despair. Something we’ve spent years of our lives building. Just, you know, gone in days,” says Souslenskii, 39, whose company produces patented nanoparticles of silver, copper and bismuth that only a dozen other companies in the world can manufacture. He’d only recently launched international sales after over two decades of development.

His workers left Kharkiv after the city was attacked. “We couldn’t ship even products we had already manufactured.”

In southwest Kyiv, Vlad Bazarov sits in his room in his family’s house with the curtains drawn tight as Russian missile strikes shake the city. For the young entrepreneur, the war has stifled a business that was just hitting its stride.

Vlad Bazarov is the 24-year-old CEO of a small business called LoveYouHome, which specializes in winter cashmere blankets. Bazarov, who doesn’t know what remains of his business, has donated a hundred blankets to the Ukrainian military.

The 24-year-old’s startup LoveYouHome had racked up about $300,000 in sales last year of blankets, sheets, and cookware, 90% of which he says he made with a workforce of 250 in a subleased factory in Kharkiv. He says he has no idea of its current condition.

Bazarov says Ukraine was a good place to set up a manufacturing and export business because of a free trade agreement with European countries including the U.K., Germany, Spain, Poland, France, Italy, Sweden, Netherlands, and the Czech Republic. “And the infrastructure is pretty good. I mean roads, railroads, and airports,” he says. He stops and corrects himself. “Well, it used to be.”

While his friends have picked up weapons to join the volunteer territorial defense force, Basarov says he wanted to help defend his country in “non-lethal ways.” He has donated about 100 of his quilts and wool blankets to the Ukrainian military, as well as his own blood and money.

Amid the chaos of the war, some of the entrepreneurs say they’re holding tight to their visions for the future of their business. Zdesenko views the war as an opportunity to set an example as a leader and looks forward to rebuilding. For Medovoi, the war is another reason to double down on AltexSoft as a location-agnostic IT consulting company.

Says Bazarov, “All of us are stressed and tired because of bombardments and sirens at night. At the same time, I can see people feeling very united. Right now, the whole nation has united against one big enemy.”

Biden’s Approval Rating Jumps 8 Points After State Of The Union, With Strong Support Of Handling Of Ukraine Crisis

Some Vaccine Injured Getting Better While Others See Little Improvement