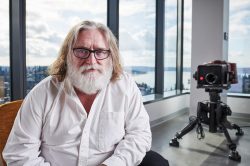 While promoting the Steam Deck, the new portable gaming PC from Valve that all reviewers seem to be enjoying quite a bit, Gabe Newell is back doing interviews and saying a lot of…fun things.

Back when blockchain gaming was first starting to take off, Steam took an early stance that it would not allow blockchain-based games on its platform, while rivals like Epic Games said they were more open to it. Now, Gabe is talking about both that decision, and all the tech hype surrounding the “metaverse.” It’s…kind of amazing.

On the blockchain and NFTs (via Eurogamer):

“The things that were being done were super sketchy. And there was some illegal shit that was going on behind the scenes, and you’re just like, yeah, this is bad. Blockchains as a technology are a great technology, that the ways in which has been utilized are currently are all pretty sketchy. And you sort of want to stay away from that…. The people who are currently active in that space are not usually good actors.”

And on the metaverse (via PC Gamer):

“There’s a bunch of get rich quick schemes around metaverse. Most of the people who are talking about metaverse have absolutely no idea what they’re talking about. And they’ve apparently never played an MMO. They’re like, ‘Oh, you’ll have this customizable avatar.’ And it’s like, well… go into La Noscea in Final Fantasy 14 and tell me that this isn’t a solved problem from a decade ago, not some fabulous thing that you’re, you know, inventing.”

Here, Newell is saying plainly what many in the gaming community have been thinking when it comes to the “metaverse” presented as a bunch of blockchain-based Second Life knockoffs that are selling virtual real-estate to stupid business brands for millions. Meanwhile, actual metaverses, immersive video games, have been around for decades and already do all the things and much, much more than these newcomers.

Very few people in this space will speak this frankly about the current gold rush situation when it comes to the blockchain, NFTs and the metaverse, but it’s great to hear from industry icon Gabe here to set the record straight.

The future of blockchain gaming and the metaverse remains hazy. Traditional publishers have been mostly scared away from offering NFTs in their games after massive, violent pushback from players whenever the issue comes up. Blockchain gaming remains its own space mostly occupied by crypto enthusiasts, not core gamers. And as for the metaverse? The main blockchain metaverses probably have no more than 10,000 DAUs combined, less than the top hundred games on Steam. Facebook is pushing for its VR-focused metaverse with Horizon, but few trust them to get it right, and they’ve already run into many privacy and harassment issues there.

The Steam Deck? Now that’s an advancement that’s a much easier sell, PC gaming on the go. And no controversies are erupting as a result.

Pick up my sci-fi novels the Herokiller series and The Earthborn Trilogy.

Most of US can now drop masks indoors, health officials say

Heres Who MacKenzie Scott Donated To So Far In February

In A David Versus Goliath Battle Between NGOs And A Pipeline Company, Goliath Is Losing