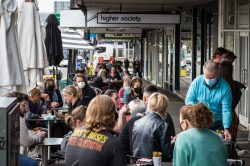 The Victorian state government of Australia will roll out a stimulus package worth $200 million (US$144 million) to fast-track economic recovery from its COVID-19 measures as Omicron variant wave subsides.

The funding announced on Feb. 21 would cover around $100 million (US$72 million) in rebate schemes to encourage people’s spending on dining, entertainment, and travel within the state.

“We think this is the best way to target support,” Victorian Industry Support and Recovery Minister Martin Pakula told reporters.

In addition, the state would inject another $30 million into its long term travel voucher program, which provides people with rebates when they spend $400 or more on hospitality services such as accommodation, experiences, tours, or attractions.

Pakula expected the government to have 150,000 vouchers ready for distribution by mid-March, a month before the Easter holidays.

The Melbourne Money scheme would also make a comeback as Victoria plans to use $10 million to draw diners into the city’s bars, cafes, and restaurants.

Melbourne Lord Mayor Sally Capp said the payback program, which would reimburse diners 25 percent of bills with a value between $40 and $500 from Monday to Thursday, would restart on March 7.

“The Omicron fog is lifting. COVID caution is turning to COVID confidence,” she said.

A further $30 million is earmarked for regional areas as well. At the same time, another $30 million had been reserved to provide rebates to customers purchasing tickets to theatres, live music venues, cinemas, museums, galleries, and other events.

According to Pakula, Victorians would have a high chance of accessing these rebates by the end of March.

People shop during the Boxing Day sales at Chadstone the Fashion Capital in Melbourne, Australia, on Dec. 26, 2020. (Naomi Rahim/Getty Images)
Furthermore, the state would put aside $60 million to help businesses buy equipment to mitigate the spread of COVID-19, plus another $34.2 million for creating 1,500 jobs in hospitality, warehousing, logistics, tourism, and food processing.

However, Espresso Lounge owner Spiros Rombotis said his Collins Street café would not benefit from the Melbourne rebate program as not many customers spend over $40 at his business, which was currently suffering from low foot traffic.

“It’s been dire straits. Unless we get people back … we’ll go under,” he said.

David Southwick, the opposition spokesman for CBD recovery and small business, referred to the stimulus package as a sugar hit.

Lorie Argus, the chief executive of Melbourne Airport, said the arrivals marked a key turning point for the aviation industry as more and more international flights started to touch down at the airport throughout the day.

The flights also kicked off the first operational day for the state’s new $200 million quarantine facility at Mickleham, which received the first batch of unvaccinated international travellers on Feb. 21.

Alfred Bui is an Australian reporter based in Melbourne and focuses on local and business news. He is a former small business owner and has two master’s degrees in business and business law. Contact him at alfred.bui@epochtimes.com.au.

From Janitor To Making Of The World’s Best Vodka: CEO Of Duvernois Creative Spirits Nicolas Duvernois Shares His Story