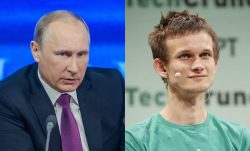 You are here: Home / News / World / Vitalik Buterin slams Putin’s actions as a crime against the people of Ukraine and Russia

On Thursday, Vitalik Buterin, the Russian-Canadian co-founder of Ethereum, lashed out at Russian President Vladimir Putin and the invasion of Ukraine. He called his vicious actions as a “crime against the Ukrainian and Russian people.”

Buterin expressed his displeasure with the Kremlin’s decision on Twitter. Just minutes after Putin stated he had launched a “special military operation” in eastern Ukraine and different media reports of explosions in towns around the former Soviet republic.

There have been words of up to 40 deaths so far as a result of early morning strikes by the Russian army and naval forces, which targeted cities including the capital Kyiv.

“Putin’s choice to forgo the chance of a diplomatic resolution to the Ukraine conflict and instead go to war has angered me much. This is a crime against the people of Ukraine and Russia.”

Vitalik made a tweet, “I want to wish everyone safety, even though I know there won’t be any. Ukraine is to be praised.”

He later stated that, although Ethereum is neutral, he is not.

Reminder: Ethereum is neutral, but I am not.

Buterin has been outspoken in his opposition to rising tensions between Russia and Ukraine. He posted a tweet earlier this month that he hoped the Kremlin would “choose wisely” in its Ukraine policy.

He wrote on Twitter, “An assault on Ukraine can only hurt Russia, Ukraine, and mankind.”

“Whether the situation will return to a peaceful path or if a conflict would break out is now up to @KremlinRussia, not Zelensky or NATO. I hope they make the best decision possible. “

Vitalik who co-founded Ethereum in 2014 after getting interested in Bitcoin as a teenager, is one of the few notable corporate executives to denounce Russia’s invasion of Ukraine thus far.

Crypto sheds tears amide Russia-Ukraine tension
Bitcoin and other cryptocurrencies dropped to a one-month low in the hours following the start of Russia’s invasion on Thursday.

Other cryptos were affected by the all-out invasion of Ukraine, which was dubbed “the worst attack in Europe since the end of WWII.”

According to Coinmarketcap data, the whole cryptocurrency market has lost more than $150 billion (€133 billion) in the previous 24 hours.

China Plans System to Take Out Asteroids Hurtling Toward Earth

Ahead of Cardano’s hardfork, new on-chain developments say this about its future…