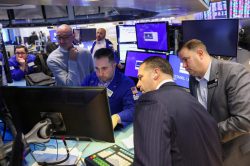 Wall Street’s main indexes jumped on Wednesday, led by gains in technology and financial stocks, as signs of progress in Ukraine-Russia peace talks lifted sentiment ahead of a widely expected interest rate hike by the Federal Reserve.

Ten of the 11 major S&P sectors rose in early trading, with financials up 2.1 percent. Morgan Stanley climbed 3.5 percent, as big banks gained in anticipation of the first rate increase since 2018.

Megacap names Apple Inc. and Microsoft Corp, added 1.3 percent each, providing the biggest boost to the S&P 500 and the Nasdaq.

The Fed is seen raising interest rates by at least 25 basis points at the end of its two-day meeting later in the day, in what would be the first in a series of rate hikes this year as it steps up the fight against stubbornly high inflation.

The policy statement is due at 2 p.m. ET (1800 GMT) and will be followed by Fed Chair Jerome Powell’s news conference. Traders will be closely watching the updated quarterly economic and interest rate projections for clues on how fast rates will increase.

“Everybody expects a 25-point rate hike later today, but it is probably going to be accompanied by a more cautious but not overly hawkish commentary,” said Robert Pavlik, senior portfolio manager at Dakota Wealth in Fairfield, Connecticut.

“People are looking mainly for projections about rate hikes going forward and we expect that the Fed is not going to back off from the number of hikes that they are planning for this year but they may take a slower approach to do it.”

Data released earlier showed U.S. retail sales increased moderately in February as more expensive gasoline and food forced households to cut back spending on other goods, which could restrain economic growth this quarter.

The S&P index recorded 14 new 52-week highs and no new lows, while the Nasdaq recorded 16 new highs and 34 new lows.

Why Is Estate Planning More Important Now Than Ever Before?