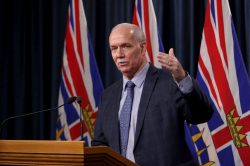 Though the China issue has recently taken a back seat to domestic crises, Canada will need to return to substantial debate about every aspect of our relations with the Chinese communist regime, one of which is decoupling.

According to public opinion polls, Canadians have consistently expressed their desire for Canada to economically distance from China and search for options elsewhere with more trustworthy partners.

As a January Angus Reid poll concluded, economic consequences notwithstanding, three out of five Canadians want less trade with China. Sixty percent of those also said it can be done with very little economic impact. Another 54 percent believe that Canada should ultimately prioritize human rights over economic interests when it comes to dealing with China.

As Beijing’s conduct on the world stage and toward Canada becomes ever more brazen, such a sentiment will only intensify. Luckily, leaders across the political spectrum have been moving in a direction recently that should do well to reflect this.

Speaking to the Winnipeg Chamber of Commerce last March, then Conservative Party Leader Erin O’Toole put it plainly that trade-offs do exist and any immediate economic risk could be weathered in order to counter the conduct of the Chinese Communist Party. In January, International Trade Minister Mary Ng announced the Trudeau government’s intention to pursue a foreign investment protection agreement with Taiwan. In a move defiant of China’s usual hostility toward any such gesture toward Taiwan, Ng met with her Taiwanese equivalent John Deng to discuss the possibilities of expanding supply chains and collaborations between the two countries in areas such as science and technology.

This signifies the increasing acceptance of the reality of China no longer being a country with which we should maintain or deepen ties. It is even coming from a Liberal government that has often been very coy about its China policy and reluctant to do anything that could be construed as hostile toward the CCP. It also serves as a rebuke to the talking point often peddled by the business elite and the CCP that there are certain markets that only the Chinese can offer, thereby beginning to follow other allies such as Australia who have made major moves away from China—despite having an economy even more integrated with China’s.

There’s a palatable shift in the direction and thinking about our economic relationship with China. However, one important element that is too often overlooked and will need to be addressed in the years to come are the relationships many of the provinces maintain with China. Through investments and trade arrangements, such relationships have been effectively used by the CCP to deepen its influence in Canada.

One of the best case studies of this is the CCP’s presence in British Columbia. Despite the diplomatic boycott of the Olympics in which the Trudeau government participated, B.C. politicians have been mingling with Chinese consul officials. On Jan. 30, for example, several politicians, including the province’s Minister of State for Trade George Chow, attended a private Lunar New Year event hosted by Chinese Consul General Tong Xiaoling, at which Xiaoling gave a propagandistic speech celebrating the CCP centennial and promoting the Games.

And this is of course a regular occurrence when it comes to the slick network Beijing has been allowed to build in the province. In 2016, the Liberal government headed by Christy Clark signed a memorandum of understanding with China’s Guangdong province that would serve as an unofficial endorsement of the CCP’s Belt and Road Initiative. It announced collaboration in areas such as 5G technology, e-commerce, and educational exchanges. It is unique in that it is the only such agreement in which a North American government is involved.

B.C. Premier John Horgan has, for the most part, maintained this agreement, showing no intention of revisiting it. After initially announcing that he would not be attending a trade mission in China after the arrest of the two Michaels in late 2018, he then backtracked and expressed his desire to travel to China in 2019, citing its importance to B.C.’s job market. He has also kowtowed on the issue of human rights, opting to be silent on the plight of the Uyghurs despite multiple requests to comment.

The apotheosis of the relationship is perhaps the construction of the World Commodity Trade Center in Surrey, a major joint project between a local firm and a Chinese state-sponsored company that is to serve as an import-export facility and facilitate further investment—all the while further entrenching the CCP’s footprint in B.C.

Seeing as it is now patently obvious that the CCP’s objective with the Belt and Road is to expand its footprint in order to challenge Western leadership in the international order by currying economic favour with smaller countries, it is rather unwise and a security threat if Canadian provinces participate.

The relationships between Canadian and Chinese provinces must also factor in our policies going forward and should be discontinued if any effort to distance ourselves from China is to be successful.

Shane Miller is a political writer based in London, Ontario.

European, US Bank Shares Recoup Some Losses; Sector Braces for Slew of Sanctions

Intro to Ayurvedic Herbs – Learn Which Ones Works Best for You

The Facts Are Published—Why Not Be Honest About It?

‘Destiny 2’ Now Has A Wordle Clone, Rolldle, That Is Actually Very Fun

Djokovic Vows to Use Tough Experiences to Fuel His Season

Why Is Tennessee Looking for a Crypto Custody Service Provider?