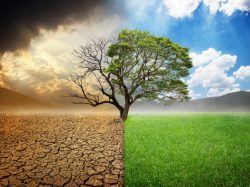 If we’re to have any shot at meeting the climate targets set out in the Paris Agreement, scientists estimate that countries would need to remove billions of tons of CO2 from the atmosphere by mid-century. And that’s just the start of things. We’d also have to continue removing increasing amounts every year thereafter.

“That’s a hell of a lot of carbon to get rid of,” says Helgason, head of research & innovation at Carbfix, an Iceland-based company that is capturing CO2, injecting it into the ground, and turning it into stone.

The reason carbon capture and storage companies like Carbfix exist is because trees alone won’t solve the world’s CO2 challenge. “We didn’t get into this climate catastrophe by burning trees,” notes Helgason.

Instead, we got into this mess by cheating. “We basically dug into the earth and pulled out hundreds of millions of years’ worth of trees, in the form of fossil fuels, and then proceeded to burn them over a span of 100 years,” adds Helgason. “There can never be enough trees in the world to rewind the amount of CO2 we’ve already put into our air—we are way past that point.”

Even if trees could solve our CO2 problem, planting them is easier said than done. First, there’s the issue of deforestation.

It’s estimated that while 15 billion trees are cut down every year, only 5 billion are replanted—resulting in an annual net loss of 10 billion trees.

With this in mind, some researchers suggest it would take the planting of 1 trillion trees, and then waiting for them to become fully grown, to have an effect on climate change. According to some research, 1 trillion fully grown trees would be able to capture, at best, 1,012 billion tons of CO2—about a third of all human CO2 emissions thus far.

Then there’s the issue of suitable habitat. According to the EU-funded REFOREST project, one consequence of climate change is an increase in severe droughts, which happens to be a leading cause of forest decline. Thus, the more the temperature increases, the drier the land becomes, eventually reaching a point where it is inhospitable to many tree species.

Climate change also makes trees more susceptible to insect- and disease-caused damage or death—which can impact a forest’s ability to sequester carbon. According to a Frontiers in Forest and Global Change study, forests damaged by insects and disease capture 69 % and 28 % less carbon respectively.

What all of this says is that while they can play an important role in removing CO2 from the atmosphere, trees alone are not a viable solution. “Natural solutions must work hand-in-hand with technological solutions, like direct air capture and permanent storage,” says Helgason.

Yet all this discussion about trees, technology and direct air capture ignores the 36.7 billion metric ton elephant in the room: the annual industrial emissions.

“All this talk is moot if we don’t address the emissions coming from industrial facilities and fossil fuel-fired power plants,” concludes Helgason. “If we don’t stop emissions at the source, we have no chance of meeting our climate targets—and it’s simply game over with or without carbon removals.”

Solar power is better than nuclear for astronauts on Mars, study suggests

What Is a Faraday Bag, and Should You Use One?

How to Change Safari’s Default Search Engine on Mac

This Week In Space podcast: Episode 10 — The best and worst space movies

Not All 5G Is Equal: mmWave, Low-Band, and Mid-Band Explained