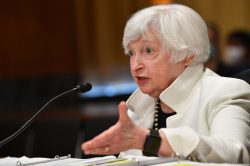 Treasury Secretary Janet Yellen said Sunday that high inflation would persist for the remainder of 2022 and that, while she expects the U.S. economy will cool, a recession is far from a sure bet.

“We’ve had high inflation so far this year, and that locks in higher inflation for the rest of the year,” Yellen said in an interview with ABC’s “This Week.”

The Treasury secretary said she expects the U.S. economy to slow, but doubled down on her insistence that a full-blown recession is not “inevitable,” despite concerns that the Federal Reserve’s aggressive interest rate hikes could tip the economy into a downturn.

“I expect the economy to slow,” Yellen said. “It’s been growing at a very rapid rate, as the economy, as the labor market, has recovered and we have reached full employment. It’s natural now that we expect a transition to steady and stable growth, but I don’t think a recession is at all inevitable.”

Yellen acknowledged that inflation is “unacceptably high” and that it is the Biden administration’s “top priority to bring it down,” while noting Federal Reserve Chair Jerome Powell has pledged to control inflation while maintaining a strong job market.

“That’s going to take skill and luck,” Yellen said. “But I believe it’s possible, I don’t think a recession is inevitable.”

Yellen also noted that consumer spending remains robust, despite higher food, fuel, and energy prices, pointing out that “even lower income households continue to have buffer stocks of savings that will enable them to maintain spending” and that she does not see a “drop off in consumer spending as a likely cause of the recession in the months ahead.”

National gas prices have tipped down slightly in recent days to $4.981 a gallon as of June 20, according to AAA, having hit over $5 per gallon last week.

The Treasury secretary also pointed to a “very strong” jobs market which she said was “arguably the strongest of the post-war period” and that she expects inflation to come down in the months ahead.

However, Yellen noted that there are “so many uncertainties relating to global developments” which could impact inflation, such as Russia’s invasion of Ukraine.

The U.S. annual inflation rate surged to 8.6 percent in May, surpassing market estimates of 8.3 percent, data from the Bureau of Labor Statistics showed.

Biden told The Associated Press on June 16 that it’s “not inevitable” that the United States falls into a recession, adding, “Secondly, we’re in a stronger position than any nation in the world to overcome this inflation.”

Republican lawmakers and other experts, on the other hand, have pointed to unprecedented government spending during the COVID-19 pandemic, and a string of Biden’s policies regarding oil, including shutting down the Keystone XL pipeline, as reasons for soaring inflation levels. Lawmakers and experts have also cited a delayed reaction from the Federal Reserve for the 40-year inflation level highs.

The Fed on Wednesday raised the benchmark interest rate by 75 basis points; the largest rate hike since November 1994 in an effort to get inflation back down to 2 percent without pushing the economy into recession.

The Best USB Hubs and Docks for Connecting All Your Gadgets

Gasoline Prices Fall Below $4.90 a Gallon as Recession Fears Weigh

Chart Wars: Between American and United Airlines, Which Stock Will Bounce Higher?