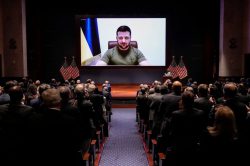 In a crisis, words matter. And so do pictures.

Call For Action
He emphasized and repeated his country’s immediate need for more military assistance. Zelensky said that if the U.S. would not implement and enforce a no-fly zone over Ukraine, they should send fighter jets, missiles and other weapons so that Ukrainians could more effectively defend themselves against Russia.

“Ukraine is grateful to the United States for its overwhelming support,” he said. “I call on you to do more.” He asked for additional sanctions against Russia and urged all U.S. companies to leave that country immediately.

References To U.S. History
One way speakers can connect with their audiences and effectively make their points is by referring events and people that their audiences know or can identify identify with.

Zelensky did that to great affect with when he referred to Martin Luther King Jr.’s famous “I have a dream” speech, Zelensky said, “I have a need. I have a need to protect our skies.”

Visuals
And knowing that a picture is worth a thousand words, Zelensky showed an emotional video collage of news clips and other disturbing pictures of the death and destruction that the Russians have inflicted on his country.

The video ended with this call for action in white lowercase letters against a black background: “close the sky over Ukraine.”

Strong Closing
For added emphasis and dramatic effect, Zelensky, whose remarks were being translated into English by an interpreter—ended his speech by speaking in English.

Advice For Business Leaders
Based on Zelensky’s speech to Congress, keep the following crisis communication best practices in mind when you update stakeholders and the public about a crisis at your company or organization.

Never forget who your audience is—and who else may be listening, reading or watching what you have to say.

To help connect with audiences and make your points, refer to people or events that they know and understand.

When communicating about a crisis, it is just as important to use pictures to help tell your story as it is to use the most effective words and information.

Keep updates about your company’s crisis short and to the point.

In addition to reciting relevant facts and pictures, it can be appropriate to tell short stories or anecdotes to help make your points memorable for your audiences.

Depending on the nature of your organization’s crisis situation, touching on the emotions of people could be very effective. But this should be done very sparingly—if at all.

When speaking, do not deliver your remarks in a monotone. Use a conversation approach and vary the pitch, tone and speed of your remarks to help emphasize key points.

Remember that all members of your audience may not fully understand English, and that it may be prudent to translate into different languages information and updates about your company’s crisis.

When appropriate, include a call for action in your updates. What do you want people to do and when how do you want them to do it?

More Help Coming From The U.S.
Hours after Zelensky’s emotional speech to Congress, President Joe Biden spoke to the nation about the unfolding crisis in Europe and America’s response to it. He said that the U.S. will provide Ukraine with a $800 million assistance package. According to a White House fact sheet, the assistance includes:

Ukraine’s foreign minister says no fly-zone the ‘only rational decision,’ pleads with Biden to reconsider

At Least 8 Killed in Kyiv as Shelling Destroys Shopping Mall

Prioritize the infield corners in your fantasy baseball drafts

Bhagwant Mann to get first Council of Ministers on March 19