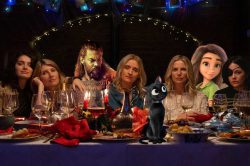 August is typically a slow month for Apple releases. The company usually unveils new iPhones and Apple Watches in September, so anything unannounced will probably wait until then. And anything announced at WWDC (like the M2 MacBook Air) is already on the market.

So what’s left? Well, the big fall OS releases have their public betas available, and those will be updated throughout the month. Apple’s services like Apple TV+ and Apple Arcade will continue to get regular releases. For the most part, though, next month is going to be a big one and August is sort of coasting our way there.

Updated 08/03/22: The Apple Arcade games coming up in August have now been announced, so we updated that section with the titles and their release dates.

With the M2 MacBook Air and MacBook Pro on the market, everything that Apple has announced is currently available for sale (even if you won’t get it for a few weeks). Apple does occasionally make surprise hardware announcements, going straight to the web with something like new AirPods, but we don’t expect anything like that any time soon.

The last time Apple announced a new product in August was in 2007 when new 20- and 24-inch aluminum iMacs arrived. In 2006, Apple also unveiled a new Mac Pro with Intel processors at WWDC.

In September, Apple is expected to announce the iPhone 14 lineup along with the Apple Watch series 8, which may include a new bigger, rugged “Pro” model. It might be time for Apple to update the Apple Watch SE, too. What other hardware is coming up this fall? We think Apple might announce the M2 Mac mini, a new standard 10.2-inch iPad, possibly the M2-based iPad Pros, and new AirPods Pro.

But we don’t expect most of this to be announced in September–probably not until October or later. Certainly, not in August!

The new iPhone will be arriving in September. IDG

For the past five years, Apple has celebrated the anniversary of the U.S. National Park Service with several initiatives. Last year, it donated $10 for every Apple Pay purchase from August 25-29 and launched a special Apple Watch Activity Challenge.

Now that the iOS 16 Public Beta is out, millions of users have the opportunity to try it out before its release this fall (likely mid-September). The same is true of the macOS Ventura, iPadOS 16, watchOS 9, and tvOS 16.

iOS 16: iOS 16 brings some really great new features, and we expect the final version in mid-September. Here’s how to join the iOS beta.

iPadOS 16: iPadOS 16 for the most part mirrors the updates of iOS, but the new Stage Manager feature (exclusive to M1 iPads) is a pretty big deal.

tvOS 16: While tvOS 16 doesn’t bring a lot in the way of new features, it will still be updated this fall to keep in line with Apple’s other OSes.

macOS 13 Ventura: Highlights of macOS 13 include Continuity Camera, new Weather and Clock apps, Stage Manager, and lots of app updates. The latest macOS release often lags behind iOS and the last few releases were in October or November. Here’s how to get the macOS Ventura beta.

There are currently no betas available in the iOS 15 branch, so iOS 15.7 might not happen (or might be a fall release that simply includes new security content).

Apple will finish up its iOS 16 beta testing in August as it prepares for a mid-September release.

Here are the shows, series, and movies we expect to release on Apple TV+ in July. This month leans heavily on children’s programming. If you want to know what’s coming later, check our full guide to upcoming Apple TV+ content.

Luck: An animated film about Sam Greenfield, the unluckiest person in the world. Suddenly finding herself in the never-before-seen Land of Luck, she must unite with the magical creatures there to turn her luck around. August 5

Peanuts classic specials: There are nine more Peanuts specials from the 60s and 70s that will be available on Apple TV+ in August. August 5

Five Days at Memorial: A limited series based on the novel by Sheri Fink that documents the first five days at a New Orleans hospital after hurricane Katrina made landfall. August 12

Lucy’s School: More Peanuts! The Peanuts gang are anxious about starting at a new school in the Fall, inspiring Lucy to start her own school instead. August 12

Bad Sisters: A 10-episode series about the Garvey sisters, who are bound together by the premature death of their parents and a promise to always protect one another. It’s a combination dark comedy and thriller. August 19

Surfside Girls:  A pair of young surfer girls dive head-first into a mystery about a pirate ship and the cursed treasure that allegedly lies beneath Surfside’s beloved Danger Point bluff. August 19

Apple releases new games to Apple Arcade on Fridays, but not every Friday is marked by a new game or significant update. Check our Apple Arcade FAQ for a full list of Apple Arcade games and more details on the service. Many games are released with no forewarning, but you’ll often see several projects listed in the Coming Soon section.

Love You to Bits+: A puzzle-filled point-and-click sci-fi adventure game for all ages. August 26

Pilates vs yoga: How do the two practices affect the body?

Scientists revived the cells of pigs an hour after death, a potential organ transplant breakthrough

What One Million COVID Dead Mean for the U.S.’s Future

Discounted wireless CarPlay adapter is a game-changer for your car