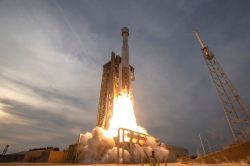 Boeing’s Starliner spacecraft is finally on its way to the International Space Station (ISS).

Starliner separated from the Atlas V’s upper stage right on schedule just under 15 minutes after launch, while the pair were over the North Atlantic Ocean. Then, 16  minutes later, the capsule aced its 45-second-long orbital insertion burn.

“We have a good orbital insertion burn,” Boeing’s Josh Barrett said during NASA TV’s webcast of today’s launch. “Starliner is on a stable, circular orbit, on its way to the International Space Station.”

An Atlas V rocket carrying Boeing’s Starliner OFT-2 space capsule launches from Space Launch Complex 40 of the Cape Canaveral Space Force Station on May 19, 2022. (Image credit: United Launch Alliance)OFT-2 is an uncrewed mission to the ISS designed to demonstrate Starliner’s readiness to carry astronauts for NASA — and it was a long time coming.

Boeing, NASA and ULA aimed to launch OFT-2 last summer. But routine preflight checks back then revealed more than a dozen malfunctioning oxidizer valves in Starliner’s propulsion system, a problem that took about eight months to identify and mitigate. (Investigators determined that humidity in the air reacted with oxidizer to produce nitric acid, which then reacted with aluminum in the valves, generating corrosion products that impeded valve function.)

And, as its name suggests, OFT-2 is a do-over, an attempt to make up for Starliner’s failure to reach the space station during its first orbital flight test in December 2019. The original OFT ended prematurely after Starliner suffered a series of software glitches and got stranded in the wrong orbit for an ISS meetup.

Such setbacks have delayed the certification of Starliner considerably compared to that of SpaceX’s Dragon capsule, which has already carried astronauts on four operational missions to the ISS for NASA. (Both Boeing and SpaceX signed multibillion-dollar contracts with NASA’s Commercial Crew Program back in 2014.)

NASA is relying on Starliner to add a “dissimilar redundancy” to the agency’s regular rotation of crews to the ISS. Starliner’s successful launch on OFT-2 puts NASA and Boeing one step closer to achieving that shared goal.

An anthropomorphic test device or flight dummy nicknamed Rosie the Rocketeer is seen strapped into a seat in Boeing’s Starliner capsule. (Image credit: Boeing)Starliner is on course to rendezvous with the space station on Friday evening (May 20). Once within range, Starliner’s novel Vision-based Electro-optical Sensor Tracking Assembly, or VESTA, will lock on to the orbital lab using artificial intelligence to help guide and maneuver the spacecraft during its approach.

Following a handful of small propulsion tests, Starliner is scheduled to dock with the ISS around 7 p.m. EDT (2300 GMT) on Friday.

Astronauts aboard the space station are planning to broadcast welcoming remarks before opening the  hatches between Starliner and the ISS just before noon (1600 GMT) on Saturday (May 21). Crewmembers will then unload more than 400 pounds (180 kilograms) of cargo and supplies sent up for the current ISS occupants, most of it food.

A video still of Boeing’s Starliner OFT-2 capsule separating from its Atlas V rocket upper stage. (Image credit: NASA TV)Some cargo will remain aboard Starliner, including the test mannequin Rosie the Rocketeer, and a set of Boeing mementoes to be handed out to Starliner program employees as space-flown memorabilia following the vehicle’s return to Earth.

Starliner will likely stay docked to the space station for four to five days, depending on weather conditions across the vehicle’s descent path and landing site, NASA officials have said. Starliner will touch down in the western United States using a combination system of parachutes and airbags.

The capsule will then be examined extensively by NASA and Boeing and, if all goes well, will be certified for crewed flight. Starliner could then launch astronauts to the ISS on a test flight, perhaps in late 2022.

Join our Space Forums to keep talking space on the latest missions, night sky and more! And if you have a news tip, correction or comment, let us know at: community@space.com.

Josh Dinner is a freelance writer, photographer and videographer covering space exploration, human spaceflight and other subjects.  He has covered everything from rocket launches and NASA’s Artemis 1 Space Launch System megarocket to SpaceX astronaut launches for NASA. To find out Josh’s latest space project, visit his website and follow him on Instagram and Facebook.

How to Force Dark Mode on All Websites in Brave

Mysterious invisible walls may have been discovered in outer space

March for Our Lives: gun control protests sweep the nation

How to Remove Viruses and Malware on Your Windows PC

How to Tell Which Animal Is Digging Holes in Your Yard