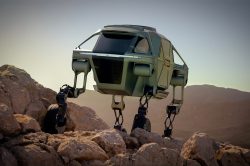 This article was translated from our Spanish edition using AI technologies. Errors may exist due to this process.

Experimentation is part of innovation . Sometimes it is necessary to put on the table ideas that may seem strange or impossible in order to create something new and different. In 2019, Hyundai presented a concept under the name of Elevate that attracted attention at the time: a vehicle with folding and articulated robotic legs that are also equipped with tires, which would allow it to advance on practically any type of terrain. In 2021, the South Korean company presented TIGER , another concept vehicle with characteristics very similar to those of the Elevate , but designed to transport equipment and not passengers, in addition to the fact that it can be attached to a module with blades that would allow it to fly.

Through a statement, Hyundai announced that it has opened a laboratory within the Montana State University (MSU) , located in the city of Bozeman, to advance the development of technology and make vehicles a reality. The company plans to invest $20 million and employ 50 researchers for the project.

The division in charge of creating the vehicles is called the Hyundai New Horizons Studio (NHS) and its director, Dr. John Suh, commented: “Bozeman is an affluent and affordable micropolitan city. Located near dozens of off-road trails with more With 150 miles of terrain and mountain access for testing, it’s the perfect fit for our new research and development lab.”

Although they may seem strange and straight out of a science fiction movie, vehicles like the Elevate and TIGER could play important roles in rescue missions in dangerous territory or during natural disasters and be of great help in future space missions to Mars or the Moon.

In these videos you can see how the prototypes work.

Zooey Deschanel Embraces the Word ‘Quirky’ and Thinks Businesses Should Too

A Simple (But Not Easy) Guide to Achieving Almost Any Dream

A Billionaire Who Operates More Than 2,400 Franchises Knows These Types of Franchisees Make the Most Money

The Paradox of Celebrity Tequila

Social Media Was Draining Me, So I Gave It Up. My Business Has Never Been Stronger.

Leaders: 30-Day Challenge To Optimize Your Mind, Body and Soul

How to Become a Self-made Billionaire, According to Mark Cuban

Battered U.S. stocks may not be bargains as investors brace for inflation data

U-Turn: Elon Musk Will Not Join Twitter’s Board of Directors

Is Algorand a Good Investment? 5 Reasons We Think It Is