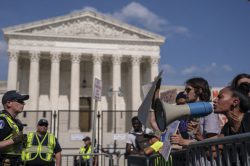 On June 26, Shapiro took to Twitter to state what he would do if elected governor.

“As Governor, I won’t hesitate to veto any bill that undermines a woman’s right to choose in Pennsylvania,” Shapiro said. “Doug Mastriano wouldn’t hesitate to sign that bill into law—and outright ban abortion in the Commonwealth.”

Pennsylvania Attorney General Josh Shapiro in Philadelphia, Pa., on March 2, 2017. (Jessica Kourkounis/Getty Images)
Hours after his initial Twitter post, Shapiro added that he would continue the pro-abortion stance of the current Gov. Tom Wolf, a Democrat.

“In Pennsylvania, women still have the choice—and that’s because of the veto pen of our Democratic Governor,” Shapiro added. “We can’t lose that veto pen.”

One day earlier, Shapiro held a rally at Philadelphia’s National Constitution Center, during which he told his supporters to vote in November and pledged his support for abortion.

The Supreme Court overturned Roe v. Wade, a seminal 1973 ruling that largely legalized abortion nationwide, on June 24 following a 6–3 vote. Justice Samuel Alito, who wrote the court’s majority opinion, stated that “Roe was egregiously wrong from the start” and, “It is time to heed the Constitution and return the issue of abortion to the people’s elected representatives.”

Abortion has become illegal for some states with so-called trigger laws, but Pennsylvania is not one of them. Currently, Pennsylvania allows abortions up to the 24th week of pregnancy.

Wolf, who has been governor since 2015, has vetoed three different bills that would have restricted abortion access in the state, in the years 2017, 2019, and 2020. The bills were passed by the Republican-controlled General Assembly.

Republican gubernatorial candidate Doug Mastriano gives a victory speech at his election-night party at The Orchards in Chambersburg, Pennsylvania on on May 17, 2022. (Michael M. Santiago/Getty Images)
Following the Supreme Court’s decision on abortion, Mastriano released a statement calling the ruling “a triumph for innocent life.”

“Roe v. Wade is rightly relegated to the ash heap of history. As the abortion debate returns to the states, Pennsylvania must be prepared to lead the nation in being a voice for the voiceless,” Mastriano said.

“Pennsylvanians will not be distracted by the hysterics of the left as they exploit this ruling to try to fulfill their far-left agenda,” Mastriano continued. “As they struggle with all-time record-high inflation, the people care deeply about the price of gas and groceries, as well as out-of-control crime and good-paying jobs—which is exactly why I will prioritize these issues as their governor.”

Voters in Pennsylvania consider abortion an important issue. According to a recent USA Today/Suffolk University poll (pdf), abortion was the third (16 percent) most important issue for female voters in the governor’s race, behind the economy (24 percent) and gun control (18 percent). The poll was conducted from June 10 to 13.

Abortion became the most important issue (24 percent) for female voters in Pennsylvania’s Senate race, according to the poll, ahead of the economy and gun control, each with 16 percent.

John Kincaid, director of the Meyner Center for the Study of State and Local Government at Lafayette College, told WFMZ-TV that the Supreme Court’s ruling on abortion will have a marginal effect on voters in Pennsylvania.

“The decision may bring out more Democrats in the election than there otherwise would be, so that will help the Democrats, but I believe it will have a more marginal, rather than major, impact,” Kincaid said.

Frank Fang is a Taiwan-based journalist. He covers US, China, and Taiwan news. He holds a master’s degree in materials science from Tsinghua University in Taiwan.

As Amazon’s ‘Lost Ark’ Rises, ‘New World’ Is Struggling Hard At 3% Of Its Initial Peak

Six dead, 25 wounded in US mass shootings in Philadelphia and Chattanooga

The ‘Halo Infinite’ Numbers We Can See Do Not Look Great