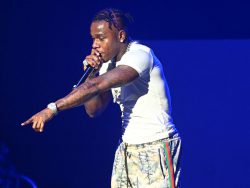 STATESVILLE, N.C.—No charges will be filed in a shooting at the North Carolina home of rapper DaBaby, police said Thursday.

Troutman police said on social media that the investigation into the April 13 shooting has been completed, news outlets reported. According to the post, investigators consulted with the Iredell County District Attorney’s Office in determining no charges will be filed.

DaBaby and at least one other person were at the home when the shooting happened on the evening of April 13, Troutman Police Chief Josh Watson told The Associated Press. But Watson wouldn’t say who was shot or who did the shooting, citing an ongoing investigation at the time. He said the injuries of the unidentified wounded person were not life-threatening.

The shooting was the latest in a series of incidents involving DaBaby, whose real name is Jonathan Kirk. In 2019, he pleaded guilty to a misdemeanor charge of carrying a concealed weapon after a fatal shooting at a Walmart in Huntersville, North Carolina, just south of Troutman. He was not charged in the shooting.

Last year, the Grammy-nominated rapper was arrested after he took a loaded gun into an upscale store on Rodeo Drive.

‘Better Call Saul’s’ Bob Odenkirk reveals co-stars helped save his life: ‘They screamed their heads off’

You’re Not Imagining It. Stores Are Locking Everything Up.

The End Of Globalization For Russia And Russians: What It Means