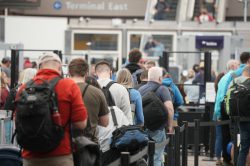 Many forecasters believe the number of travelers will match or even exceed levels in the good-old, pre-pandemic days. However, airlines have thousands fewer employees than they did in 2019, and that has at times contributed to widespread flight cancellations.

People who are only now booking travel for the summer are experiencing the sticker shock.

Domestic airline fares for summer are averaging more than $400 a round trip, 24% higher than this time in 2019, before the pandemic, and a whopping 45% higher than a year ago, according to travel-data firm Hopper.

“The time to have gotten cheap summer flights was probably three or four months ago,” says Scott Keyes, who runs the Scott’s Cheap Flights site.

Internationally, fares are also up from 2019, but only 10%. Prices to Europe are about 5% cheaper than before the pandemic – $868 for the average round trip, according to Hopper. Mr. Keyes said Europe is the best travel bargain out there.

Steve Nelson of Mansfield, Texas, was standing in line this week at a security checkpoint in Dallas-Fort Worth International Airport, ready to board a flight to Nice, France, with plans to attend a Formula One race in Monaco.

“I decided it’s time to work on my bucket list,” Mr. Nelson said. “I hadn’t even considered Monaco until this year.”

Although many countries have eased rules for travel, there are still restrictions in place that add to the hassle factor. Notably, the United States still requires a negative COVID-19 test within a day of flying to the country.

“We only realized that a couple days before coming here. We kind of panicked to find a place to get tested,” said Jonny Dawe, a software engineer from Bath, England, who was in Dallas for a conference – his first major trip since the pandemic started. “You have to check all the testing requirements for the countries you are visiting, and you have to worry about contracting the virus.”

Online spending on U.S. flights eased in April after a torrid March, but it’s still up 23% from spring 2019 mostly because of higher prices, according to Adobe Analytics.

Airlines blame the steeper fares on jet fuel roughly doubling in price over 2019. It’s more than that, however. The number of flights has not returned to pre-pandemic levels even though demand for travel is surging.

“We have more travelers looking to book fewer seats, and each of those seats is going to be more expensive for airlines to fly this summer because of jet fuel,” says Hopper economist Hayley Berg.

When travelers reach their destination, they will be greeted with hotel rates that are up about one-third from last year. Hotels are filling up faster, too. Hotel companies blame the higher prices on increasing costs for supplies as well as workers in a tight labor market.

Rental cars were hard to find and very expensive last summer, but that seems to have eased as the rental companies rebuild their fleets. The nationwide average price is currently around $70 a day, according to Hopper.

Jonathan Weinberg, founder of a rental car shopping site called AutoSlash, said prices and availability of vehicles will be very uneven. It won’t be as bad as last summer, but prices for vehicles will still be “way above average, if you can even find one,” in Hawaii, Alaska, and near destinations such as national parks.

Even if you drive your own car, it’ll still be pricey. The national average for regular gasoline hit $4.60 a gallon on Thursday – more than $6 in California. Those prices have some people considering staying home.

“You don’t really get used to $6 gas,” said Juliet Ripley of San Diego as she paid $46.38 to put 7.1 gallons in her Honda Civic. The single mom of two has no summer vacation plans other than an occasional trip to a nearby beach.

For those determined to travel, however, it is an open question whether airlines, airports, hotels, and other travel businesses will be able to handle them.

More than 2.1 million people a day on average are boarding planes in the United States, about 90% of 2019 levels and a number that is sure to grow by several hundred thousand a day by July.

The U.S. Transportation Security Administration has tapped nearly 1,000 checkpoint screeners who can move from one airport to another, depending on where they are needed most.

“We are as ready as we possibly can be,” says TSA chief David Pekoske.

Airlines that paid employees to quit when travel collapsed in 2020 are now scrambling to hire enough pilots, flight attendants, and other workers. The largest four U.S. airlines – American, Delta, United, and Southwest – together had roughly 36,000 fewer employees at the start of 2022 than before the pandemic, a drop of nearly 10%, despite aggressive hiring that started last year.

Pilots are in particularly short supply at smaller regional airlines that operate nearly half of all U.S. flights under names like American Eagle, Delta Connection, and United Express.

Airlines are trimming summer schedules to avoid overloading their staffs and canceling flights at the last minute. This week, Delta cut about 100 flights a day, or 2%, from its July schedule, and more than 150 flights a day on average, or 3%, in August. Southwest, Alaska, and JetBlue previously reduced summer flights.

Cancellations aren’t limited to the U.S. In the United Kingdom, easyJet and British Airways scrubbed many flights this spring because of staffing shortages.

Air travel within Europe is expected to recover to pre-pandemic levels this summer, although visitors from outside the region will likely be down 30% from 2019, according to a new report from the European Travel Commission. The group doesn’t expect international travel to return to normal until 2025.

Russia’s war in Ukraine does not appear to be hurting bookings to most of Europe, according to travel experts, but it will reduce the number of Russian and Ukrainian travelers, whose favorite destinations include Cyprus, Montenegro, Latvia, Finland, Estonia, and Lithuania, the commission said. Russian tourists tend to be big spenders, so their absence will hurt tourism economies in those destinations.

Also largely missing: Chinese tourists, the world’s largest travel spenders, who remain largely restricted by their government’s “zero-COVID” strategy. Some European destinations report that the number of Chinese tourists is down by more than 90% from 2019.

This story was reported by The Associated Press. Kelvin Chan in London and Christopher Weber in Los Angeles contributed to this report.

Foldable iPhone display tech might be in the works, report claims

From the archives: When food allergies were ‘strange pranks’ for scientists to decipher

A steroid might be why octopuses starve themselves after mating