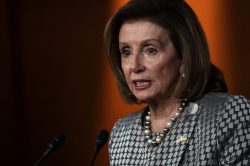 The Republican National Committee (RNC) has filed a lawsuit against House Speaker Nancy Pelosi (D-Calif.) and the other members of Congress investigating the Jan. 6, 2021, Capitol breach.

In a statement, the RNC said they’re suing Pelosi and others to stop the Jan. 6 Committee from obtaining confidential information about the internal activities of RNC members after the committee ordered it to hand over records involving its fundraising efforts.

“The RNC has sued to stop the January 6 Committee from unlawfully seizing confidential information about the internal activities of the Republican Party and millions of its supporters, which is completely unrelated to the attack on the Capitol,” said Justin Riemer, chief counsel for the RNC.

Riemer went on to say that Pelosi and the committee members have “weaponized Congress’ investigatory powers by issuing this staggeringly broad subpoena, which tramples on core First Amendment rights of the RNC and millions of Americans.”

The subpoena, issued on Feb. 23, seeks information from Salesforce, a cloud-based software company headquartered in San Francisco, regarding  how the Trump campaign used the platform to “disseminate false statements about the 2020 election in the weeks leading up to the January 6th attack.”

“Information provided to the Select Committee and public reporting indicate that during the 2020 election cycle, Salesforce provided its services to President Donald Trump’s reelection campaign and to the Republican National Committee.”

The subpoena further alleges that the Trump campaign and the RNC jointly sent out hundreds of “inflammatory” emails to supporters using a Salesforce-owned tool between election day and Jan. 6, of which nearly all were “suggesting that the election was fraudulent.”

Evidence suggests that the claims made in those emails motivated a number of defendants who have been charged with violations regarding the Jan. 6, 2021, Capitol breach, according to the House committee.

The RNC stated that Salesforce “collects and maintains significant amounts of RNC data, including confidential and sensitive information about private individuals with whom the organization has engaged, ultimately helping develop and execute political strategies.” The group said the subpoena is “so broad” that it risks exposing the personal and private data of up to 60 million Americans.

The RNC said it’s challenging the subpoena, which it has called “unconstitutional overreach,” because “one of America’s two major political parties may not use the force of government to unlawfully seize the private and sensitive information of the other.”

It also vehemently denied having any involvement in the Capitol breach and said it has “repeatedly condemned it,” pointing to the fact that it had also been the target of violence after a bomb was allegedly placed outside of RNC headquarters, which “put our staff in immediate danger and is something the committee has yet to investigate.”

In a March 9 statement, Jan. 6 Committee spokesperson Tim Mulvey said the subpoena, which was issued in February, has “absolutely nothing to do with getting the private information of voters or donors.”

“The Select Committee issued a subpoena to an email fundraising vendor in order to help investigators understand the impact of false, inflammatory messages in the weeks before January 6th, the flow of funds, and whether contributions were actually directed to the purpose indicated. This action has absolutely nothing to do with getting the private information of voters or donors,” Mulvey said.

The RNC are the latest people to sue the House select committee after MyPillow CEO Mike Lindell announced in January that he was also filing a lawsuit in an effort to stop telecommunications company Verizon from sharing his information with the panel.

The nine-member bipartisan committee investigating the origins of the Jan. 6, 2021, breach of the Capitol has subpoenaed a number of people as part of its investigation, including former Trump national security adviser Mike Flynn, former Trump adviser Stephen Bannon, and former White House chief of staff Mark Meadows.

Former Trump adviser Stephen Miller filed a lawsuit on March 9 to block a subpoena from the House committee for his phone records after they accused him of spreading misinformation about the November 2020 presidential election and alleged voter fraud.

Will Ukraine Join The EU? After Zelensky Signs Membership Application, Here’s What Could Come Next

Covid Was Third Leading Cause Of Death In U.S. Last Year