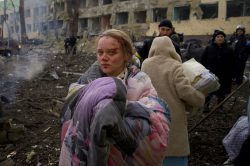 Facebook and Twitter took down posts from almost 20 Russian embassies across the world this week, efforts to stop a Kremlin disinformation campaign about a Ukraine hospital.

The embassies had used the social media sites to post videos, text and photos claiming Russia hadn’t attacked the facility, which was struck by Russian forces last week, killing at least two adults and a child. Among other claims, the faked content questioned the authenticity around a picture of a dying woman carried on a stretcher, a photo that has rapidly become one of the war’s most iconic images. This disinformation was originally spotted by FakeReporter, an Israeli research group.

An onslaught of misleading or inaccurate information has flooded onto social media during Russia’s invasion into Ukraine, at least some of it distributed by Russian authorities—often directly through official accounts. The social media sites have struggled to know what to do with government accounts, usually concluding that the newsworthiness of those tweets outweigh any potential harm.

Generally, they’re no more regulated than another user’s account, but the Ukraine war has reignited questions about whether a government account should be held to a higher standard, similar to the debate around the platforms’ decision to ban or suspend President Trump in 2021. Both Facebook and Twitter have already limited the reach of Russian state-affiliated media outlets, reducing the circulation of their stories.

The embassy posts weren’t taken down all at once, further reflecting the challenges the platforms face when contending with an expansive campaign. Almost immediately after the March 9 hospital attack in Mariupol, Twitter and Facebook removed posts from the Russian embassy in Britain about the hospital shelling. But it would take several more days for them to realize Russian embassies in Denmark, Greece, Japan and other countries had put out nearly identical content.

The embassies also shared the same content on Telegram, including through the channel run by Russia’s Ministry of Foreign Affairs. And while it may be gone from Facebook and Twitter for now, Telegram has so far taken no steps to combat it.