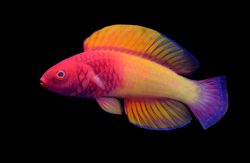 Adult male Rose-Veiled Fairy Wrasse (Cirrhilabrus finifenmaa) shows off his colors for the ladies. … [+] This species is found at the equator in the Indian Ocean, living in the coral reefs of the Maldives Islands archipelago. (Credit: Yi-Kai Tea.)

An international team of scientists just announced the discovery of a tropical marine fish in the Maldives, an archipelago comprising 26 island atolls perched on the crowns of an ancient submerged volcanic mountain range near the equator in the Indian Ocean. The newly described fish, christened the rose-veiled fairy wrasse, Cirrhilabrus finifenmaa, gets its common name in recognition of its distinctive purple and magenta facial color patterns. Its specific name, “finifenmaa”, was inspired by the national flower of the Maldives, the pink rose (Rosa spp.) — which is known as fiyatoshi finifenmaa in the Dhivehi language that’s spoken in the Maldives.

“[W]e are really proud that [this new discovery] is the first to be co-authored by a Maldivian scientist and that it has a Maldivian name”, senior co-author of the study, Luiz Rocha, said in email. As the Curator and Follett Chair of Ichthyology at the California Academy of Sciences, Dr Rocha is a widely-respected expert specializing in coral reefs.

“Decolonizing science is very important to me”, Dr Rocha continued in email, “and we are doing all we can to make it happen.”

“It has always been foreign scientists who have described species found in the Maldives without much involvement from local scientists, even those [species] that are endemic to the Maldives”, observed study co-author Ahmed Najeeb, who was born on and grew up in the Maldives. He works as a biologist and Senior Research Officer at the Maldives Marine Research Institute, located on the island of Malé.

The Maldives (officially known as the Republic of Maldives), is an island nation comprising an … [+] island archipelago that lies southwest of Sri Lanka and India, about 750 kilometres from the Asian continent’s mainland in the Indian Ocean. Its capital is Malé.

“This time it is different”, Mr Najeeb continued, “and getting to be part of something [like this] for the first time has been really exciting, especially having the opportunity to work alongside top ichthyologists on such an elegant and beautiful species.”

Really Seeing This Fish For The First Time
But we’ve known this fish for awhile now, haven’t we?

“I was quite surprised when we figured out it was new”, agreed Dr Rocha in email. “This is one of those [species] that is not entirely a new discovery.”

Originally, this species was collected in the 1990s, but was mistaken for an adult of a different — but closely related — species. This close relative, the ﻿rosy-scaled fairy wrasse, Cirrhilabrus rubrisquamis, had been described ﻿by a different team of researchers in 1983 (ref) from a single juvenile specimen collected in the Chagos Archipelago, an island chain located 1,000 kilometers (621 miles) south of the Maldives.

Thus, as more specimens were photographed and collected in the Maldives, they were erroneously assumed to be adult male and female ﻿rosy-scaled fairy wrasses. Except, they weren’t.

“When [lead author of the study] Kai received a picture of an adult from Chagos (which is the true C. rubrisquamis), we realized that the one from the Maldives was new”, Dr Rocha explained in email.

“It started when [co-author Joseph Rowlett] sent me a video of some footage taken in Chagos Archipelago by researchers from the University of Plymouth”, elaborated lead author of the study, Yi-Kai Tea, a graduate student who is completing his dissertation research of the fairy wrasses at the University of Sydney and at ﻿the Australian Museum Research Institute.

“[W]hen Joe showed me this video, I was very intrigued, because none of the fishes in the video looked anything like the ‘rubrisquamis’ [that] we know”, Mr Tea continued in email. “I then looked deeper into it and after examining a bunch of specimens, realized that the 1995 Maldivian specimens actually represented a new, distinct species, and that rubrisquamis is still only known from the single juvenile specimen, and that the fishes in this Chagos video are actually the adults of the ‘real’ rubrisquamis!”

Mr Tea and his collaborators came to this conclusion after completing a painstaking examination of the anatomy and morphology of both adult and juvenile specimens of the newly collected Maldivian fish. Their analysis included measuring the dimensions of the head, jaw, and tail, measuring the length of its fin rays, and counting individual scales on different body regions. DNA was also collected and sequenced, and a preliminary analysis already confirms that this ‘multicolored marvel’ is indeed, a species that is new to science.

Equally important to identifying a new species is re-evaluating and updating the known geographic ranges for both species of fish. Originally, C. rubrisquamis was thought to have a large natural range that extended more than 1,000 kilometers from the Chagos Archipelago to the Maldives.

“What we previously thought was one widespread species of fish is actually two different species, each with a potentially much more restricted distribution”, Mr Tea said.

One of the only underwater photos of Cirrhilabrus finifenmaa in the wild. This photo shows a … [+] cleaner wrasse servicing C. finifenmaa. (Credit: Luiz Rocha, California Academy of Sciences.)

“[T]his habitat that we are studying (mesophotic coral ecosystems from 50 to 150m depth) is virtually unknown, that’s why we find so many new species on them”, Dr Rocha explained in email. “[But] because they are unknown, they are mostly unprotected, and we are noticing many impacts reaching them, from fisheries and plastic pollution to coral disease and bleaching.”

To help protect its coral reefs and learn more about them, the Maldives Marine Research Institute collaborates with the Hope For Reefs Initiative, which operates under the leadership of the California Academy of Sciences and Dr Rocha. Last month’s expedition — the first ever survey of the Maldives’ so-called “twilight zone” (or mesophotic) reefs — not only collected new specimens of C. finifenmaa that were essential for this study, but it collected at least eight more species that are yet to be described and thus, may also be new to science.

Although C. finifenmaa is new to science, it is well known to the aquarium industry.

“Though the species is quite abundant and therefore not currently at a high risk of overexploitation, it’s still unsettling when a fish is already being commercialized before it even has a scientific name,” Dr Rocha said. “It speaks to how much biodiversity there is still left to be described from coral reef ecosystems.”

“[T]his is a fish that has been known for a long time, and is one that is readily available in pet stores. I have kept many of them as aquarium fish in the past”, confirmed Mr Tea, who has been an avid fish keeper for much of his life. “It was a species we all thought we knew very well, but then after more careful examination, turned out to be a new species!”

“This exemplifies why describing new species, and taxonomy in general, is important for conservation and biodiversity management”, Mr Tea said.

And now, a new mystery to solve
The taxonomy of finifenmaa appears to be resolved, but now a new taxonomic mystery has popped up.

“WHO is C. rubrisquamis?” Mr Tea wondered in email. “At the moment, this species is still known only from the single juvenile collected in Chagos, and from still photos taken from the video footage captured in Chagos by Plymouth.”

On one hand, C. rubrisquamis certainly looks very much like C. wakanda, a new species found on the east coast of Zanzibar, Tanzania, that Mr Tea and Dr Rocha described together in 2019 (ref). This relatively newly-described species first caused a stir in the media because its name, Wakanda, came from a fictional country in East Africa.

“They look similar enough that they might actually be the same species”, Mr Tea observed in email. “However we don’t know this for sure because we do not have any proper comparative material of rubrisquamis from Chagos.”

On the other hand, there are some differences between C. rubrisquamis and C. wakanda — differences that could be important.

“[T]he video footage of rubrisquamis from Chagos has some coloration patterns that look different from wakanda, but again, this is all quite tenuous without any proper material to look at”, Mr Tea pointed out in email.

Why this newly described fish species is so special
Although every species is special, this brilliantly colored reef fish is remarkable because it ticks off several noteworthy ‘firsts.’

“[T]he fact that NO Maldivian scientist has described any local Maldivian fish species is just wild to me!” Mr Tea tweeted to me. “To be able to change this, decolonize science, and be part of a diverse international list of collaborators makes this all the more special to me!”

“Nobody knows these waters better than the Maldivian people,” Dr Rocha agreed. “Our research is stronger when it’s done in collaboration with local researchers and divers. I’m excited to continue our relationship with MMRI and the Ministry of Fisheries, to learn about and protect the island nation’s reefs together.”

“Collaborating with organizations such as The Academy helps us build our local capacity to expand knowledge in this field. This is just the start and we are already working together on future projects,” Mr Najeeb said in a statement. “Our partnership will help us better understand the unexplored depths of our marine ecosystems and their inhabitants. The more we understand and the more compelling scientific evidence we can gather, the better we can protect them.”

And let’s be real: besides being notable for all the remarkable ‘firsts’ that it represents, this new species is special because it is stunningly beautiful. Gorgeous. Eye-popping.

“Just look at the fish, admire it for a second. It’s a rare beauty that is the result of hundreds of thousands of years of evolution”, Dr Rocha concurred in email. “We should love and protect it as we would a priceless work of art.”