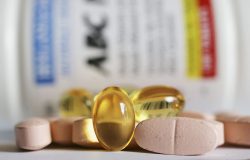 In this brilliant missive from Dr. Royal Lee’s Therapeutic Foods Company, the “facts” published refer to studies showing that only natural vitamins—that is, vitamins as they are found in food, as complexes of many cooperating compounds—are capable of curing vitamin-deficiency diseases such as beriberi, scurvy, pellagra, and rickets. On the other hand, isolated or synthetic fractions of the vitamin complexes, which today we define as “vitamins,” do not cure deficiency diseases. For instance, few people realize that ascorbic acid (what is known today as “vitamin C” despite the fact that it is just one of numerous compounds in the natural vitamin C complex) has never been shown to cure scurvy. Nor does synthetic thiamine cure beriberi or synthetic vitamin D cure rickets. In fact, Dr. Lee points out, studies at the time indicated that isolated vitamin fractions might ultimately make these conditions worse. Scientific study supports these facts, he says, so why not be honest about it? Therapeutic Foods Company, 1941.

[The following is a transcription of the original Archives document. To view or download the original document, click here.]

Do You Know What a Vitamin Is?
A vitamin is that nutritional factor whose absence or deficiency from the diet is responsible for the development of a known, definable syndrome and whose restoration to the diet schedule will cure the disease and relieve the symptoms of deficiency except when degeneration prevents recovery.

Synthetic—or “pure”—vitamins will not meet this acid test. The facts are published by accepted authorities and available to anyone who cares to dig them out of the medical journals.

Beriberi is the classic deficiency disease resulting from vitamin B1 deficiency. Now we find that “pure” B1 (thiamine) will not cure beriberi because other, unknown factors of the complete vitamin B complex are necessary.1 Obviously, synthetic thiamine is falsely represented as vitamin B1.

Scurvy is the classic deficiency disease resulting from vitamin C deficiency. Now we find that “pure” C (ascorbic acid) will not cure scurvy because other factors of the complete C complex are necessary.2 Obviously, synthetic ascorbic acid is misleadingly called vitamin C.

Rickets is the classic deficiency disease resulting from vitamin D deficiency. Now we find that “pure” D (viosterol) will not cure or prevent rickets as well as natural vitamin D, and, furthermore, it is not the same substance.3 Obviously, it is misrepresentation to call viosterol vitamin D.

(It might be here noted that the very authorities who discovered chemically purified vitamins C and D are [among] those who refute the vitamin action of these substances. These men are scientific enough to retract their mistaken conclusions, but commercial interests have “stolen” the products and commercialized them widely and profitably.)

Lack of growth is the classic deficiency symptom resulting from vitamin G deficiency. Now we find that synthetic G (riboflavin) will not promote growth in absence of other, unknown fractions of the complete complex.4 Obviously, riboflavin is falsely represented as vitamin G.

Pellagra is the classic deficiency disease resulting from deficiency of the PP [pellagra-preventing] factor. Now we find that the “pure” PP factor (nicotinic acid) will not cure pellagra because other, unknown factors of the complete G complex are necessary.5 Obviously, nicotinic acid cannot be accurately termed a “vitamin.”

Not only is the administration of synthetic so-called “vitamins” useless in attempting to combat deficiency disease, but also it may be actually dangerous to the health of the patient. High unit dosages of vitamin B1, for instance, may cause a fatty infiltration of the liver in the absence of the natural synergist choline.6

At the time of this printing—April 4, 1941—an Associated Press report tells of a speech by Dr. Clarence A. Mills, Professor of Experimental Medicine at the University of Cincinnati, delivered before the New York Academy of Medicine. Dr. Mills tells of observing acute toxic symptoms resembling hyperthyroidism occurring among people taking doses of thiamine (vitamin B1). He advises caution in its use, since overdosage can result in toxicity.

Dr. Agnes Fay Morgan of the University of California, basing her conclusions on diet studies with dogs reared exclusively on crystalline vitamins, warns that the administration of single, synthetic principles such as thiamine or nicotinic acid may precipitate conditions worse than the subacute deficiency state.7 Thus, even a normal intake of unbalanced synthetic vitamins is dangerous to health.

The facts are published. The above information conclusively dynamites the pseudoscientific foundation for the $100,000,000-a-year synthetic vitamin business. The commercially profitable but scientifically unsound unit-potency method of comparing vitamin concentrates must definitely be discarded.

The Therapeutic Foods Company has always maintained that the only real vitamin is a food complex—just as carbohydrates, proteins, and fats are complete food complexes—and that no one factor of the complex can be isolated and called the vitamin anymore than we could call glucose the carbohydrate.

At last, we are beginning to accept the obvious fact that vitamin-deficiency disease symptoms are no more than conditions of specialized starvation. We would not attempt to cure protein starvation with one amino acid but would prescribe beefsteak of unknown chemistry. Then why do we accept the imbecilic idea that a vitamin starvation can possibly respond to a single chemical instead of to a complete food complex of unknown chemistry?

Man has certainly reached the ultimate in theoretical egotism when he pretends that he can improve on nature’s supply of balanced foodstuffs. It was man’s pathetically unsuccessful attempt to improve nature’s balanced grains, sugars, and other foods by “purification” that led to the discovery of vitamins!

With the recognition of the existence of vitamins, logical chemists pursued the rightful course of investigating their chemistry, but so-called scientists and commercial men went off half-cocked to state that these isolated and purified substances were actually the vitamins!

Now the facts are published. These synthetic, purified substances are not the vitamins. In our frantic and fruitless search for a “pure” vitamin, we have learned again the timeworn lesson that there is no chemically purified food. Nature can once more sit back and chuckle, “What fools these mortals be.”

For the past six years, the Therapeutic Foods Company has been active in combating the propaganda of the swivel-chair “experts” and has been uncompromising in its contention that single, chemically-purified, unit-standardized principles are not vitamins and that their use is therapeutically unsound. At last the truth is published by independent research authorities. We are proud that our original scientific contentions have stood the acid test of time. Research based on clinical observation seldom gets lost in the maze that unsubstantiated theory does.

We invite comparison of our CY vitamin complexes in your practice. The ultimate test of any commercial concentrate is the results that you as a physician can obtain with it, irrespective of the knowledge of its chemistry. We were warming ourselves with coal hundreds of years before we knew it contained carbon. Patients with “incurable” deficiency diseases are responding today to CY vitamin concentrates of unknown chemistry.

A clinical test of our B Complex in heart arrhythmias, our C Complex in an infectious case, or our CY-1710 in a case of low vitality will serve to convince you of the superiority of a natural product, gleaned from multiple food sources in order to retain the priceless “unknown factors” vitally necessary for the delicate balance of the complete vitamin complex.

The facts are published! Why not be honest about it?

3. Steenbock, Kletzein, and Halpin. “The Reaction of the Chicken to Irradiated Ergosterol and Irradiated Yeast as Contrasted with the Natural Oils.” Journal of Biological Chemistry, 97:249, July 1932.

US, allies condemn Russia at UN over its attack on Ukraine nuclear plant

Leroy Merlin, Nokian Tyres, Renault—Here Are The Companies Under Fire For Russian Ties

Class Of 1997: 25 Years Decades After Their IPOs, Where Are These Companies Now?