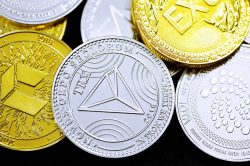 The team at Tron DAO has announced the purchase of 504,600,250 TRX, at an average price of $0.07727, as part of its reserves for the USDD stablecoin. This amount, worth $38.993 million, follows the blueprint set by Justin Sun to back the USDD stablecoin with $10 billion worth of digital assets.

USDD Total supply as of May 7th
At the time of writing, the circulating supply of USDD according to the Tron DAO reserve website currently stands at $211.245 million. Additionally, $1 billion worth of USDD has been authorized to be issued meaning that $788.754 million is set to be released into circulation in the days or weeks to follow.

Tron DAO Secures Three Partnerships
Also worth mentioning is that the Tron DAO reserve has thus far secured three partnerships with Alameda Research, the Amber Group, and the Poloniex Exchange. The three partners are now members and whitelisted institutions of the Tron DAO Reserve.

The Price of Tron (TRX) Continues to Benefit From the Launch of USDD
In terms of value, the hype and activities surrounding the launch and usage of USDD have benefited Tron (TRX) in the crypto markets. Consequently, Tron (TRX) has reentered the top 20 digital assets on Coinmarketcap having increased in value by 32.54% in the last week alone.

TRX/USDT chart on the daily timeframe
Trading above the latter moving average is a clear indicator that Tron (TRX) has fought against the general crypto market turmoil led by Bitcoin losing the $38k support level. Maintaining this bullishness for Tron will be paramount as the crypto markets approach the weekly close and the anxiety in traditional markets on Monday due to the US Fed raising interest rates and kick-starting Quantitative Tightening.

Tron’s daily MFI, RSI, and MACD also point towards an overbought scenario. Therefore, a pullback to the 200-day moving average of around $0.076 is likely in the days to follow.

Property in Portugal Sells for 3 Bitcoins in Crypto Only Sale

Seven Companies You Wouldn’t Expect To Be Mining Bitcoin

EUR/USD: Bulls run out of steam just ahead of 1.0600 post-Payrolls

Postmaster general: Get used to ‘uncomfortable’ rate hikes for mail in the coming years

GoCrypto Celebrates as Ljubljana Ranked Most Crypto-Friendly City in Europe

Ahmed Yousif on CoinGeek Backstage: We’re educating governments about the power of blockchain