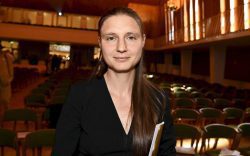 Maryna Viazovska, who works on the geometry of spheres, is one of four winners of the coveted prize this year

Maryna Viazovska is known for work on sphere packing. Credit: Vesa Moilanen/Lehtikuva/AFP via Getty Images
Ukrainian number theorist Maryna Viazovska is among the four winners of the 2022 Fields Medals, one of the highest honours in mathematics that is conventionally awarded to people aged under 40. The other winners are James Maynard, a number theorist at the University of Oxford, UK; June Huh, a specialist in combinatorics at Princeton University in New Jersey; and Hugo Duminil-Copin, who studies statistical physics at the Institute of Advanced Scientific Studies (IHES) near Paris. The International Mathematical Union (IMU) announced the winners at an award ceremony in Helsinki on 5 July.

“All of the medalists are incredibly deserving and talented, showcasing the vibrancy of mathematical research across the globe,” says Bryna Kra, a mathematician at Northwestern University in Evanston, Illinois, who is president-elect of the American Mathematical Society.

Viazovska, who is based at the Swiss Federal Institute of Technology in Lausanne (EPFL), is the second woman ever to earn the award. She is best known for her solution of the sphere packing problem — finding the arrangement of spheres that can take up the largest portion of a volume — in eight dimensions.

In a three-dimensional space, the most efficient way to pack spheres is the pyramid arrangement, akin to how oranges are packed on trays in a grocer’s shop (proving this mathematically was extremely hard and was the subject of a tour-de-force paper in the 1990s). But in four or more dimensions, very little is known, says Henry Cohn, a mathematician at the Massachusetts Institute of Technology in Cambridge. “It’s this horrific gap in our knowledge — almost embarrassing for humanity,” said Cohn in an address following the Fields Medal announcement. Viazovska introduced new techniques into the problem that came from number theory and the theory of symmetries in eight dimensions. “Given how poor our understanding is in other dimensions, it’s really miraculous that Maryna was able to get this exactly,” Cohn added. More recently, Cohn himself has helped to extend the result to 24-dimensional space.

“Viazovska invents fresh and unexpected tools that allow her to jump over natural barriers that have held us back for years,” says Peter Sarnak, a number theorist at the Institute for Advanced Study in Princeton.

The Fields Medals and other IMU prizes are normally announced at the opening of the International Congress of Mathematicians (ICM), which takes place every four years. This year’s congress was scheduled to begin on 6 July in St. Petersburg, Russia, but the plan was scrapped following Russia’s invasion of Ukraine in February. Instead, the awards ceremony was moved to Helsinki and the congress will take place as a virtual event.

“We condemn the madness, the injustice, and the irreversibility of war that threatens the very existence of humanity,” wrote four members of what had been the local organizing committee statement on 27 February.

The committee that chooses the Fields winner — whose members’ identities were kept secret until today — reportedly made its decision before the invasion.

At a satellite conference to the ICM on 2 July, another Ukrainian-born woman, Svetlana Jitomirskaya at the University of California at Irvine, won the inaugural Ladyzhenskaya Prize in Mathematical Physics — the first major prize for the discipline to be named after a woman but open to people of any gender. The prize celebrates the late Russian mathematician Olga Ladyzhenskaya (1922-2004), who narrowly missed out on her own Fields Medal when her candidacy was considered in 1958. Before Viazovska, the only woman to win a Fields Medal was the late Maryam Mirzakhani, in 2014.

This article is reproduced with permission and was first published on July 5 2022.

ABOUT THE AUTHOR(S)Davide Castelvecchi is a staff reporter at Nature who has been obsessed with quantum spin for essentially his entire life. Follow him on Twitter @dcastelvecchi

Celsius Beats Down Liquidation Price With $120 Million In Loan Repayments

What ancient graves can teach us about the history of inequality

Could Apple’s rumored HomePod actually be a tiny Studio Display?

Does Your Internet Provider Know That You’re Using a VPN?

Can country living and a new EV plant coexist? Some Georgians say no.

Climate change could introduce humans to thousands of new viruses