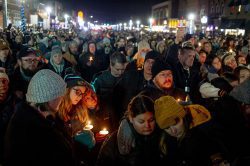 When it comes to preventing school shootings, “we’re all on duty,” says Peter Langman – a psychologist, trainer, and author who has spent years studying these terrible yet relatively rare acts of gun violence.

School shootings are “certainly preventable,” he says, noting that we don’t usually hear about ones that have been thwarted because they’re nonevents. But “many potential attacks are stopped,” he says.

Why We Wrote This
Expert Peter Langman is convinced that preventing school shootings is possible – and that we all have a part to play.

Strategies for averting school shootings tend to fall into two categories. Lockdown procedures and active-shooter trainings are “reactive,” Dr. Langman says. And while important, they’re not his focus.

“Prevention is done through being proactive,” he says, “which means having a threat assessment team in each school so that when students or parents or anyone in the community reports safety concerns, you have people on-site who can investigate those concerns and determine if it’s a false alarm, a joke, a hoax, or if it’s a legitimate threat of violence.”

The point of these teams is not to punish, he says. “If a student is in crisis, they want to connect that student to whatever resources are necessary to get them out of crisis.”

That sentence may sting in the wake of the May 24 massacre in Uvalde, Texas. Yet that’s the message shared by Peter Langman, a psychologist, trainer, and author who has spent years studying the perpetrators of these tragedies and how to prevent them.

“We’re all on duty,” says Dr. Langman, who serves as a researcher for the National Threat Assessment Center of the Secret Service.

Why We Wrote This
Expert Peter Langman is convinced that preventing school shootings is possible – and that we all have a part to play.

Dr. Langman began his study of school shooters unexpectedly in 1999, when, shortly after the Columbine massacre, he was asked to evaluate teenagers for their potential as school shooting threats. The Pennsylvania-based psychologist spoke to the Monitor about pathways to prevention. The exchange has been lightly edited and condensed.

Do you consider mass school shootings as inevitable or preventable?

They’re certainly preventable, and many potential attacks have been thwarted. We tend not to hear about them, because it’s a nonevent. … I think it’s worth knowing that many people see warning signs, report them, and [school shootings or other attacks] are prevented. So that’s the good news, that they are preventable.

What is the single most urgent action to prevent more school shootings?

The best thing schools can do is to have a trained threat assessment team within each school. …

In the wake of Columbine, schools all over the country implemented things like lockdown procedures, training on how to survive an active shooter, and so on. And these things are important and could save lives, but those are reactive measures. …

Prevention is done through being proactive, which means having a threat assessment team in each school so that when students or parents or anyone in the community reports safety concerns, you have people on-site who can investigate those concerns and determine if it’s a false alarm, a joke, a hoax, or if it’s a legitimate threat of violence. …

For a threat assessment system to work, you have to have people reporting safety concerns. … And one of the best ways to report that is to have an anonymous tip line.

Can you explain a little more about how these threat assessment teams operate?

A threat assessment team is a multidisciplinary team, and the personnel will vary depending on the school and positions they have. Ideally you have an administrator, a mental health person – that could be a school psychologist, counselor, social worker, maybe a school nurse – an IT person, maybe a facilities person who’s involved with how doors lock and entry points and surveillance cameras and so on. A law enforcement person, if you have a school resource officer.

You want to have a team with an array of training and backgrounds and perspectives, because everyone brings something valuable to the table. They would get involved when someone reports a safety concern. They would look into it. It’s not that they want to punish students. They want to keep students safe. And if a student is in crisis, they want to connect that student to whatever resources are necessary to get them out of crisis.

Peter Langman, a Pennsylvania-based psychologist, has spent years studying the perpetrators of school shootings and ways to prevent these tragedies. “The best thing schools can do is to have a trained threat assessment team within each school,” he says.

According to its website, the Uvalde Consolidated Independent School District lists threat assessment teams as a security measure in the district. What are common weaknesses with threat assessment plans that schools can be alert to?

However, sometimes the danger is what’s called an outsider threat. That means someone who’s not part of the school community. And this is what happened at Sandy Hook; this is what happened at Robb Elementary School. When the perpetrator is an outsider to the school community, there’s no way the school can have that person on their radar – unless someone were to see or hear a threat that specifically mentions that school as the intended venue of the attack.

When there’s an outsider threat, the best way to mitigate that threat is for someone who knows the perpetrator, who sees or hears any warning signs, to report what they know to the local police or to a local field office of the FBI or Secret Service so that someone can investigate and intervene.

If prevention is key, who should be looking for what, exactly?

In many cases, the warning signs are so explicit that in hindsight it’s hard to believe people didn’t report them. But because they’re so explicit, often people don’t take them seriously. For example, there have been kids who have told intended victims that they’re going to come to school and shoot them or put a bullet in their head. But especially when kids are young, in their early teens, and they say things like that, people don’t take it seriously. Even in their later teens, their friends may think they’re just shooting their mouth off, they’re talking big, they’re trying to get attention. There are all kinds of reasons that people dismiss obvious warning signs of violence.

Do you ever worry that even the best intentions to educate about prevention may place an undue burden on school personnel or other local stakeholders, in place of more systemic or legislative change?

When it comes to prevention, there’s so many angles to be considered. … Multiple states are now requiring that schools have threat assessment teams, so that’s a legislative step in the right direction. But the burden should not just be on schools or students. In my book, “Warning Signs,” one of the themes … is that we’re all on duty, that we all have a part to play in maintaining safety in our communities. …

In one case, it was an 18-year-old woman working in a pharmacy processing photos, and she saw photos of an arsenal of guns and bombs and close-ups of a person’s angry face. And she notified the police. And when the man showed up to pick up his photos, the police were there. He was arrested. They searched his apartment, and he had detailed plans and massive amounts of guns and bombs. And the attack was planned for his school campus the following morning.

Again, this is a very complicated issue. My primary focus when it comes to firearm access is to point out that when you’re dealing with juvenile school shooters … in the overwhelming majority of cases, they’re getting their guns from their own homes – from the homes of relatives. … Typically, these are legally owned firearms that are not kept securely in the home, so I think firearm security in the home is a critical issue. I’d like to see a public education campaign just to improve firearm security.

What, if anything, gives you hope?

I think as a nation we’re moving in the right direction in terms of putting more emphasis on school safety, getting people trained. I travel around the country doing trainings for various education, law enforcement, and mental health organizations, teaching them about warning signs and prevention. There’s continual interest. There are groups dedicated to violence prevention and school safety. So there are reasons for hope. And as I said, many potential attacks are stopped.

What’s the Best Antivirus for Windows 10 and 11? (Is Microsoft Defender Good Enough?)

AI’s Threats to Jobs and Human Happiness Are Real

Full moon looms under icon of Paris in incredible photo

Google Made It Easier to Hide Yourself from Google Search

Fortnite Returns to iPhone and iPad With Xbox Cloud Gaming